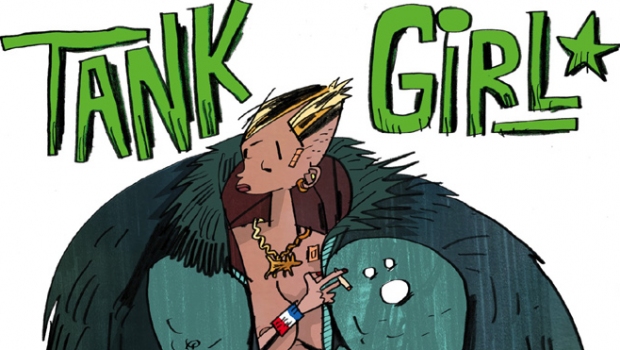 Driven and crazy as ever, Solid State Tank Girl #1, delivers the whackiness of the world as only a true Tank Girl can.

Spearheaded by the insanity called Alan C. Martin a.k.a the writer, we see Tank Girl and her mutated kangaroo boyfriend entering a radio shop, looking for spare parts for Booga´s A.M. Radio, which he and TG been talking to other people with. About what, the readers will immediately ask, but the answer might be one depraved new story in the life of TG!

When entering the store, Booga short circuits himself and apparently the only way to fix him, is getting shrunk to bacterial proportions and getting injected inside Booga´s body to work some Tank Girl magic from the inside! So Tank Girl calls her friend Jet Girl and Barney and they go for it! As if this is not crazy enough, they discover vintage bikini´s as well as a baby growing inside Booga.

The more you read, the crazier it gets and this is only the beginning of this 4-issue series!

And it promises a lot since Titan has told readers that “somewhere along the line Booga manages to electronically summon the gang’s evil counterparts, fronted by the darkest bitch on the planet – ANTI-TANK GIRL! The fight is to the death, as each gang member draws on their deepest, most screwed-up powers to eliminate their own personal nemesis. Things are about to get very dark, very bloody… and very stupid!”

Now that is some statement!

Alan C. Martin a.k.a the writer sure is stretching his muscles and it is a wild ride as there ever was!

The art… let us discuss art. Debut artist, Warwick Johnson Cadwell, sure is fresh and his style is something you need to either take for granted or just plainly love and as Steve White, Senior Comics Editor said so eloquently, “The new Titan Comics imprint is all about taking a chance on new creators and new talent, and pairing Warwick’s street-art energy to Alan’s potty-mouthed imagination has refreshed Tank Girl once again. The results are blindingly good!”… that might be true for some, but BUT but I am just much more in love with the non-alternative art in comics of which I particularly adore Rufus Dayglo’s renditions of Tank Girl. Nevertheless, Cadwell makes a point of truly making the team-effort and with his art underlines every offbeat-remark Martin can come up with!

Solid State Tank Girl #1 hits comic stores on May 15, 2013. The series will also be available to read day and date on the iPad, iPhone, Web, Android and Kindle Fire, exclusively through the comiXology app and comiXology.com