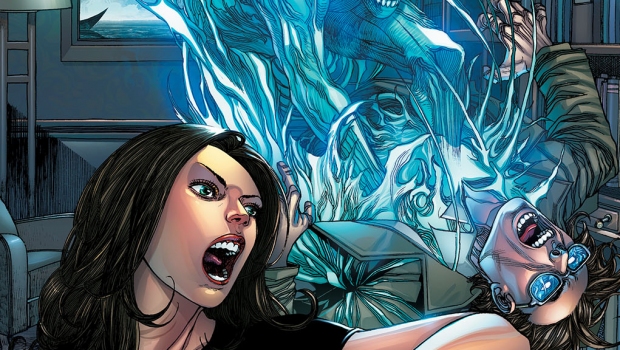 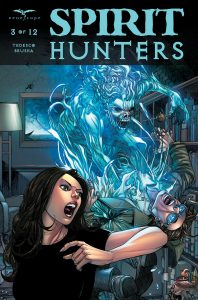 Zenescope is a master at telling horror stories and their Spirit Hunters keep getting better with every issue.

This issue starts with a group of kids outside a convenience store where Tess works. After the kids split up, one of them seems to suffer a cruel death from spontaneous combustion. We cut to West Chester PA Where our hero’s are discussing how her powers work. They pull up the spontaneous combustion case and look it over. They continuing looking for clues and don’t believe the investigators claim that this is the result of an “Accident” where the Zippo lighter explodes. What they discover is an horrific explanation that no investigator would ever believe.

Pat Shand is reliably solid with his supernatural tales and he takes Dr. Michael Chase to the Newburyport, Massachusetts police department. Chase introduces himself as one of the paranormal investigators on the case to Sherriff McLellan. The Sheriff tries to break the tension by joking that he expected Chase to be wearing a tin foil hat. A neat little story that starts as a routine case but takes a turn for the dark and sinister. The plot thickens as our hero’s discover a grave robbing group that digs up the past and more unpleasant situations which threaten Newburyport. Pat Shand is spot on with the build up of suspense and character development that sees our hero’s face a threat unlike any other they have before.

Julius Abrera does a fine job of bringing about creepy atmosphere and a sense of fear. His use of contrast is perfect for a horror title. The way he illustrates the boy succumbing to spontaneous combustion is eerie and hints to a supernatural explanation without giving away to much early on in the story. The page which reveals the real antagonist is shocking and brings about a morbid feeling that works well, I really enjoy how he handles these panels. They’re not so much action oriented but bring about a feeling of dread which is important to anyone that draws a horror title.

What can I say? NICE. This cover is so effective it’s off the wall how well it works to bring us into the story, a dark blue hue evokes the feeling of night and terror. A ghost seems to be choking Dr. Chase as his back is arched. The girl in the foreground is horrified and about to flee the scene as she is rightly afraid of the apparition in front of her. This cover evokes a feeling of hopelessness for our heroes that will rightly catch the eye of the casual comic book store surfer. A great set up for an unforgettable issue.

The message is very clear in this issue. You shouldn’t mess with forces that you don’t understand because they will come back to haunt you, in this case literally. I love the simple lesson it evokes. If you leave well enough alone and don’t disturb the dead, also don’t take what doesn’t belong to you then you will be ok. If you do stuff that you shouldn’t be doing then you will face the consequences of your decisions. A simple yet effective message which is also age old and goes back to the ten commandments. But even after thousands of years people still don’t get it and have to take what isn’t rightfully theirs and poke their noses in other peoples business.

Teens are dying under mysterious circumstances and a paranormal connection brings the Spirit Hunters team onto the case. The investigation leads them to a cemetery where it seems the dead who have long been buried have found reason to exact lethal revenge on the living.