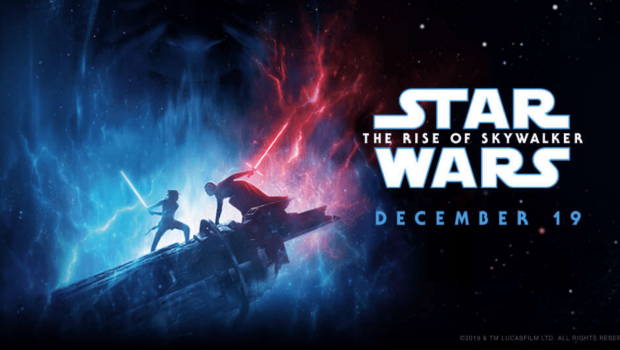 I cannot give this film a solid review without spoilers this time. Kylo Ren (Driver) finds a device that leads him to Emperor Palpatine (McDiarmid), who looks pretty good for having been dead for a few decades. Palpatine tells Ren that he created Snoke to lure him to the dark side. Rey (Ridley) is continuing her training under General Lea (Fisher). After a few hiccups, she seems ready to go, nothing to difficult for her to overcome. The gang heads out to find Lando Calrissian (Williams) to aid them on this mission. R2D2 stays behind with Lea. During this mission, they must extract some kind of text from C3PO (Daniels) which wipes his memory. Why he couldn’t just read it from his memory is never made clear, unless it was just a gimmick to try and build suspense. Then all roads finally lead to the final showdown between Grandfather and Granddaughter, reminiscent of the final showdown between Darth Vader and Luke Skywalker in Return of the Jedi.

This was a valiant effort to redeem the franchise and end on a positive note. If you love great special effects and action, you’ll love this movie, if you’re looking for something more, you may have to look elsewhere. J.J. Abrams does a great job with directing action in all his movies, however, the writing here is generic. There’s not a quotable line of dialog in the film. There is a constant reminder of how they all must stick together and if they act as a team, they’ll succeed. I was glad to see everyone back from the original trilogy, even the Ewoks return, including Harrison Ford. But, again, they were there only for moral support, which isn’t a bad thing, but everyone’s pep talks to their juniors consisted of “stand strong, you can do it.” Including Han, as a memory, to Kylo Ren, whose struggling between the good and dark sides of the Force and Luke to Rey, who appears as an astral projection, like Obi-Wan did to Luke in the original trilogy. And speaking of Obi-Wan, why couldn’t we have gotten a little prequel treatment here and bring Ewan McGregor on board for a cameo? The prequels may be maligned by a lot of naysayers in the media, but they’re still an important part of the mythos and McGregor was definitely a high point from those films. It would have been nice if the ninth film paid homage to the entire series, not just the original three. The film teases killing off a main character near the beginning in an effort to tug at our heartstrings but after killing Han and Luke, I really couldn’t feel a loss for any other character, except for Lea, who does die in this film, but we knew that was the idea from the beginning of the series and with the untimely passing of Carrie Fisher, we knew she wouldn’t be back. But the character I’m talking about wasn’t killed off anyway and the supposed death scene didn’t resonate, at least not with me. Plus, the fact that this is the last film precludes any cliff hangers, well there actually is one, but I won’t discuss that here. I’ll see if you can figure it out (hint, it involves Lando Calrissian and a new character.) Speaking of Lando, it’s about time they brought him back in the series, he was always one of my favorite characters and they should have brought him back sooner, but better late than never, I guess. And the octogenarian has just as much energy as the younger members of the cast. His voice is still crisp and clear where the other aged members sound it. I was glad to see Finn (Boyega) and Poe’s (Isaac) characters treated a bit better this time, even if the writers played it a bit too safe and didn’t give them much to do except fly around and shoot lasers at other ships. I guess they didn’t want to risk upsetting fans of these characters this time around and made them kind of like an interstellar paunch and John from Chips. Adam Driver does the best job of all the characters with what he’s been given to work with. His Kylo Ren struggles with the good and dark sides of the force. He shows real remorse over killing his father and generates the most emotion from any of the characters. The C3P0 subplot didn’t resonate, partly because they gave away how he would be back while they played that card and it’s pretty much the same thing that Star Trek The Next Generation did with Data and B-4 in Nemesis. Then we come to the finale. Grandfather versus Granddaughter, and it falls flat. Palpatine dares his granddaughter to kill him, like how he dared Luke to kill his father in Return of the Jedi. But in Jedi, Anakin was redeemed. He showed genuine remorse for his actions and Luke could see that. Here, there is no remorse. If Rey killed Palpatine no one would have cared, he’s another one of those muhaha types of villains that’s evil for the sake of being evil and has no qualities that we can relate to. We don’t care if Palpatine dies or not, in fact, we want him to die. When Rey doesn’t kill him right away, I didn’t feel the tension the film should have wrought. Palpatine goes on to draw energy from both her and Kylo Ren, who shows up at the last minute. So much energy that he attacks the entire rebel fleet along with the star destroyers. The combined efforts of Rey and Ren…whoa, that could be the name of a folk-rock group…anyway back to the review, their combined efforts defeat Palpatine before he can destroy the rebel alliance. Then the cavalry arrives to save the rest of the fleet. One wonders how a being that strong could generate so much energy could be so easily defeated. But the universe is saved, and everyone lives happily ever after.

Whereas Rian Johnson bent over backward to offend just about every fan of the original series in Last Jedi, J.J. Abrams bends over backward not to offend anyone and plays it really safe. The result is a lackluster emotionless vehicle that tries to pander to the fan base. He’s trying to woo back those who lashed out and formed the Fandom Menace. Will he succeed? We’ll find out by next weekend as of this writing I guess when we see how far the film drops percentage-wise after the highly successful opening weekend. This was a valiant effort but falls incredibly flat.