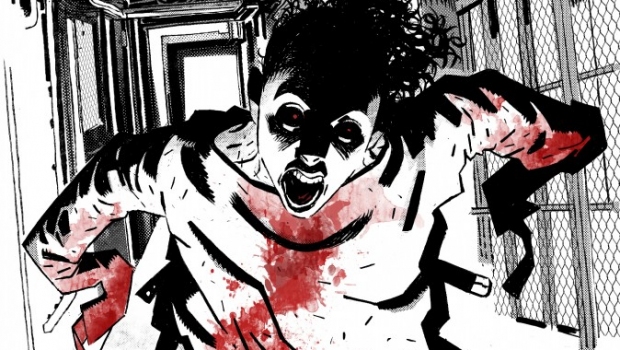 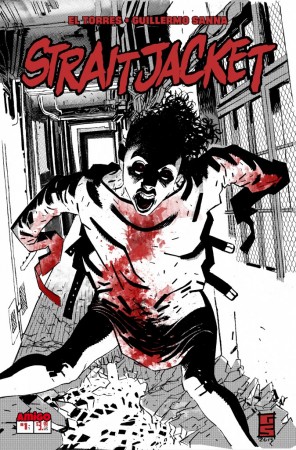 Writer El Torres delivers more then he promises, making sure this issue is read in one breath, mesmerizing in the B&W&Red artwork by Guillermo Sanna.

If Amigo Comics would only reach more readers, since they sincerely deserve the attention. You can have action/adventure and horror and suspense and even supernatural comics without needing to go to another publisher and with every series being top-notch it should be a no-brainer.

With Straitjacket writer Torres shows you the world of Alex Wagner who murdered her brother when she was but a small 12-year-old child. She was institutionalized overnight because the explanation did not really meet regular ‘requirements’ as she believes she protected the world against “The Darkness” with the help of her brother in the Otherside.

Now at age 27 she is transferred to a new facility, with new doctors at her side who will try to understand her while… Alex and her dead twin brother will try to do their best to kill the demons and save the world?

Torres made sure that Alex is portrayed as an intense woman, who is verbally immensely strong and has secrets aplenty.

This is a new horror miniseries by El Torres, this time exploring the depths of a fancy, modern mental institution which hides more than a normal person could see… but Alexandra Wagner isn’t normal. And her madness is the only thing that can save us.

Not only the story is new, thought provoking and intriguing, but the stunning B&W-art by Guillermo Sanna is expanded with the use of red tones making it look even more primal and scary adding a new level of intensity, which really sets a new standard of coolness.

Bottom line? Spice up your superhero/Marvel/DC pre-orders and get this amazing new miniseries which will most likely never leave your bookshelves ever again.