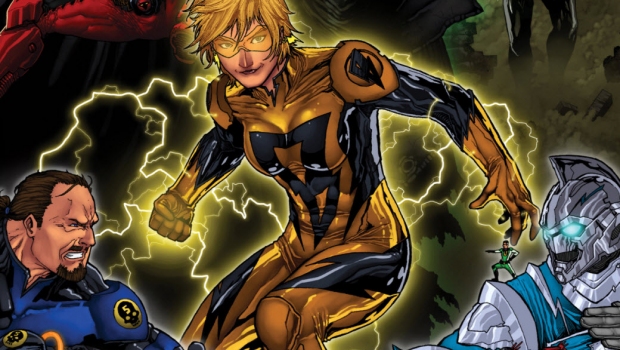 Super! is created by writer/artist Zack Dolan and writer/letterer Justin Piatt. They set up shop at Kickstarter and more then enough people wanted to see what Super! #1 was going to be all about. In September Unlikely Heroes Studios is coming out with their first issue and more afterwards.

This first debuting issue is an oversized comic setting up this newly invented world in which superpowered characters are running, flying and teleporting around places as well as setting up towards one fine cliffhanger-ish ending after this issue’s main conflict. This first issue is also making sure the readers understand the rules of this game as well as the powers of the many MANY folks in this issue.

The story revolves around Paula, who is a waitress by day, but whenever she can she is also the superhero Blitz. Blitz is part of the superhero team that works to protect the city of Cosmopolis. Superheroes are commonplace in Cosmopolis and sadly so are superbaddies.

The fun thing about this issue is that the creators are not afraid to treat this story as a funny story, making sure it does not take itself overly serious and even trying to make a interesting POV of matters like secret identities. The story however also takes itself serious when it needs to. The female characters are not the underdressed sexy-going cheesecake versions but are indeed taken seriously despite the lovely sense of humor in all pages.

Combined with the frisk lines, the fresh coloring, the detailing in facial expressions gives the project a treat for the eyes and sets a high standard on the Indy Scene.

Super! is a treat everyone should be savouring so spread the word and make sure that on September 25th you will get this at your comic store. At 52 pages and with the low cost of $2.99 you are even being friendly to your own wallet.