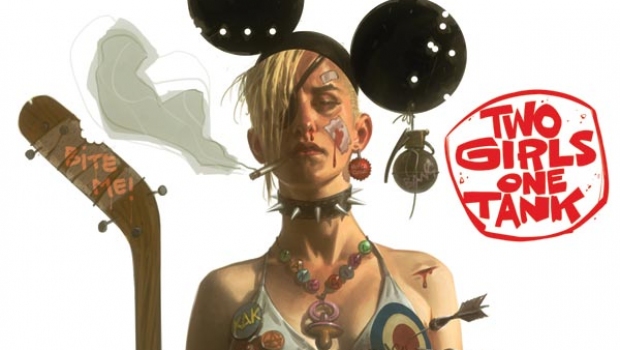 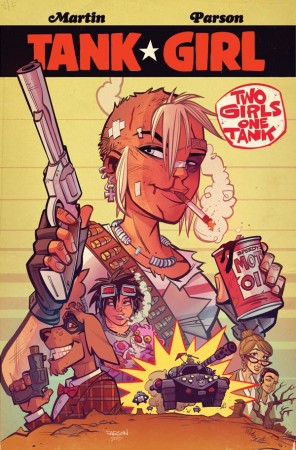 The wacky world of Tank Girl is back! And what a ride. This issue begins with Magnolia Jones and her partner Rob Roy Figurehead who own a gallery of fine art and collectables being delivered a huge piece which will definitely catch the curators consideration. A group of soldiers wheel in…The original Tank Girl…Tank. Rob wants to set a price on this beauty but Magnolia reveals that she is a huge Tank Girl fan and says she doesn’t want to sell the vehicle.

Alan Martin keeps the reader rewarded with his unorthodox brand of wit as he returns Tank Girl to our collective comic book consciousness. Magnolia asks Roy how one of his collectors could obtain such a magnificent masterpiece and he replies that they won it in a card game with some dumb-arse-kangaroo. The titular transcendent star of this title, Tank Girl herself, finds out her tank is missing and asks her cowardly companions where it is and all they tell her is that they fell asleep for ten minutes and it disappeared. She is uprightly upset and takes her funky friends on a fact finding mission with infinitely inferior and vulgar vehicles. Will Tank Girl recover her cherished chariot?

Brett Parson‘s art is succinctly suited to this unorthodox utterance. His thick lines and over-exaggerated expressions show the artistic team is having a lot more fun than they probably should be having. His style is like a cross between Demented Disney animals and Archaic Archie Andrews Art. Tank and Maggie are like a punk version of Betty and Veronica while Barney makes Goofy look like a svelte James Bond. Just the right amount of fun at just the right time for this comic book reviewer. 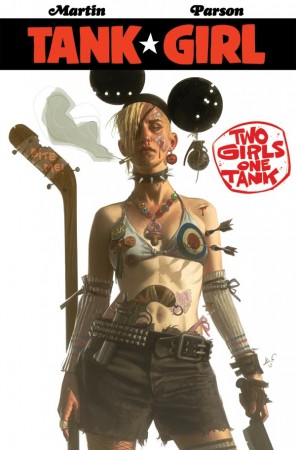 The conclusion of this title sees Truck Drivers, an entire army, treacherous Trickery and tantalizing team-ups all in an effort to prevent Tank Girl from getting what she wants. The set up for the next issue promises Twice the action, Twice the fun and Twice the…well, I can’t tell you that. Just rejoice oh connoisseur of fine funny Books. TANK GIRL IS BACK!