"Why does everyone in this ..." /> Review: Tank Girl: Two Girls One Tank #3 – Comics for Sinners
Kaching Comic Reviews 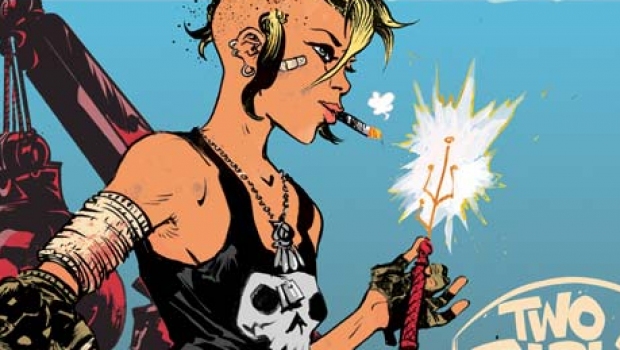 “Why does everyone in this town look like a reject from a shitty nineteen eighties heavy metal band?” – Subgirl

Ah! The Tantalizing Tank Girl has returned for the third interesting issue. Back from the dreary dead is the superior Sub Girl and to celebrate our avenging anit-heroes go on a radical raid. The smelly signal for our crazy crew is Tank Girl’s flatulent fart! After our happy hero let’s loose some gross gas the title terrorists ultimately unleash holy hell on the unsuspecting urbanites. Once this terrible town has been distinctly destroyed the real revelation as to why our titillating Tank Girl wanted to obviously off the innovative inhabitants is righteously revealed. She wanted the choice chocolate cake they were trying to keep to themselves.

Yes this campy creative team took it’s grody girls into a hapless hamlet and collectively creamed the entire populated place just so their loony leader could insanely indulge in a portly pastry. However, all is not as it scarily seems as there’s much more to these preposterous proceedings then they thought. The sole survivor of these doomed denizens is brought along as a meager mascot he’s named Sissy Shirley. Sub Girl informs the reluctant robot that he’s her bionic bitch now. It’s an alarming adventure crazily conceived from our motivated Martin.

Bombastic Brett is back with his over the top Ideal illustrations. His corny comic characters do juicy justice to manic Martin’s precarious plot. His astronomical army advancing is a serious sight to behold as he deliciously depicts the sanctimonious soldiers believably bearing down on our outrageous outlaws. A-grade art to be seriously sure.

A scrumptious screwy meaty meal is about to be served up by the Terrific title character Tank Girl. She’s curiously carving into a rotten rodent. Indicating that there’ something furiously foul within the pompous pages. Our titular team is going to feel fear as they’ve never felt it before. On the sexy surface at first groovy glance it seems to be inviting inhabitants of our crusty comic stores in for a terrific treat but on closer ideal inspection We’re about to eagerly enter an unsuspecting universe of madness and mayhem. The populace will pontificate about what they have recently read.

Tank Girl thinks that she can totally trust everyone in her terrific team. As the sanctimonious super-heroes begin this inventive issue in a creative carnival of freaky fun she notices something unsettling about the recently resurrected Sub Girl. Will she be the same sensuous purely punk person that she was before she deliriously died? Even Bonkers Booga naturally notices a subtle shift in Sub Girl’s antsy attitude. the Gregarious General Fletcher finds our anti-hero’s once again as he purposefully plans to dangerously defeat the glitzy girls and bring them to their knobby knees when Tank Girl gets the inspired idea to put the subjugated submarine back in gloriously gifted action. Can Tank Girls ornery outlaws daringly defeat the mis-informed military and escape with their lovely lives? To be curiously continued.