What is left so say about this movie? Classic among sci-fi action movies, Schwarzenegger with not too many lines and at his best. James Cameron at his best. But 26 years later it’s back (You can hear Arnold saying it) and in 3D. Is it worth watching? Oh yes it is, of course it is! Especially if you never had the chance or didn’t see it back in 1991 on a big screen.

In 1984 we got the first Terminator movie. After the Austrian oak, the best bodybuilder ever had acted in some things here and there he had his serious break and start of an acting career in 1982 with Conan the Barbarian. Some would say he never had a serious acting career and the man can’t act. But no matter what, his career is without a doubt a successful one and then some. The biggest action star, together with Stallone, especially in the 80’s.
In 1984 Conan got a sequel, Conan the Destroyer. Schwarzenegger looked fantastic but the movie was nowhere near the first. That same year we got the first Terminator movie.

The director was James Cameron who made Piranha 2 : the Spawning 3 years earlier. A bodybuilder with limited acting capabilities and a director with a really bad movie on his resume… not exactly a recipe for success. But we all know the history, it led to a successful franchise (comics, games and you name it) that still is around today with 5 movies in total.
The first 2 are definitely the best, both directed by James Cameron. The following movie were much less appreciated (justified? That’s up to you). The hopefully good news is a new movie is to appear in 2019, with Cameron at the helm and Schwarzenegger in the lead. The running gag ‘I’ll be back‘ is one for eternity it seems.

A recap of the first movie : Kyle Reese (Michael Biehn) travels back from the future to 1984 to protect Sarah Connor (Linda Hamilton) because she will be the mother of John Connor, the leader of the resistance in the future. It’s a resistance against the machines that took over the earth destroying most of humankind by launching all nukes in the world, judgment day. The machines built Terminators, cyborgs, to destroy humans still remaining. They even make them look human to infiltrate human population.
One of those Terminators (Schwarzenegger) is sent back by the machines to kill Sarah Connor before giving birth.
It’s a highly entertaining movie with now outdated effects, but as a classic it holds up. In the end the Terminator is destroyed, with Reese dead but he had the chance to get Connor pregnant, so there will be a John Connor….say hello time paradox! Ah what the hell, just ride along in the fun rollercoaster of a movie.

Enter Terminator 2 : Judgment Day! The highly successful sequel and the best in the franchise. The movie opens much the same as the first, electricity in the air, a strange bulb appears and in it Schwarzenegger…..crap, the Terminator is back! Terminator walks into a bar and says to a big biker to hand over his clothes and bike…..sounds like a bad joke, makes for a cool scene.
Another bulb appears and a man is inside….ah, this movie’s Kyle Reese. But he kills the cop that comes looking at the strange electricity and transforms into a cop himself. Turns out this is a new model Terminator (Robert Patrick), that can turn into liquid material/steel, morphing arms into blades, etc.
Sarah (Linda Hamilton reprising her role and looking totally awesome!) is in a psychiatric ward as patient because of her judgment day prophecies and violent behavior, John (Edward Furlong) has been born and is a teenager who lives with foster parents.
Schwarzenegger’s Terminator is one reprogrammed by the resistance and sent back to protect John Connor, the newer model played by Patrick is sent by the machines to kill John. Mother and son reunite and with the Terminator they will try to stop judgment day from happening. A chip and arm from the supposedly destroyed Terminator in the first movie were recovered and researched by Cyberdyne making judgment day still a possibility.
The man responsible for that research is Miles Dyson (Joe Morton). Sarah wants to kill him in order to prevent the dreaded future from happening and all the time the evil Terminator is hot on the heels of John and Sarah. Is the future set or not?

The movie is a certified classic because it’s really really good, a well executed rollercoaster action movie that does everything right. Even the effects hold up today. It’s fun, exciting and does everything well, it really delivers!
The 3D aspect : it’s really well done. And especially in the first scenes I thought wow, it’s as if this was made with 3D already in mind. Of course Cameron pioneered the 3D movies with his Avatar movie, but that was like 15 years later (sequels coming).
Personally I was kind of done with 3D, the gimmick is now known and lots of times it’s not actually enhancing the experience. Because it’s added later on with this Terminator movie it’s not groundbreaking or anything, but it’s definitely fun to see as this movie is so much fun. Like I said, this is your chance to see it once again, gloriously on a big screen, in 3D…..go see it!

Cameron made one change to the movie, a windshield that was broken and intact in a next shot has been edited and corrected. That’s all he permitted himself to change. Wise choice, the movie is perfect as is. On to Terminator 2019! 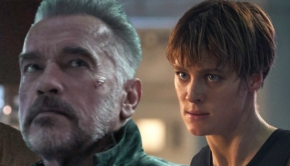 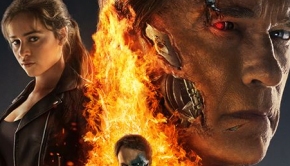