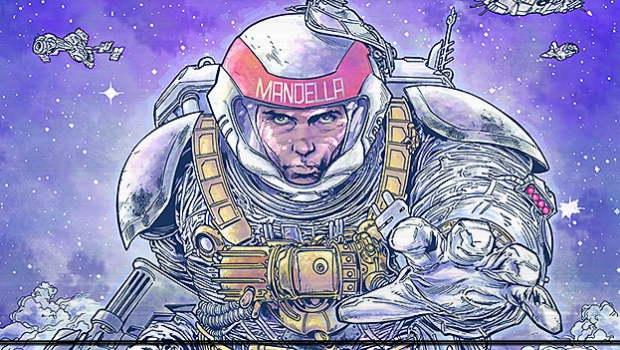 There are so few good straight up science fiction comics out there anymore. The only ones anyone’s talking about are the franchises like Star Wars and Star Trek. You might get lucky and find something original on web comics, but it’s slim pickens there too. So, it was with extraordinary joy that this Science Fiction fan came across Joe Haldeman’s Forever War adapted by Titan Comics. I haven’t read the novel since it first came out so I’m going in rusty. This is by far Haldeman’s most popular novel, which came out in 1974. I would like to find some original material written solely for the medium of comics, but for now, let me savor this moment. The adaptation opens with astronauts attempting to dig through the frozen Tundra of this green planet. An accident claims the life of one of the space explorers, Bovanovitch, and the rest of the crew go back to their ship. They don’t speak to each other, everyone’s in a state of shock. Mandella thinks back to their class room days and reminisces about the friend he lost. 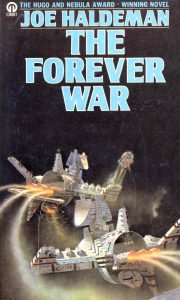 Joe Haldeman is a Hugo and Nebula award winning author. The Forever War is a novel inspired by his service in the Vietnam war. Our heroes are at war with an alien called the Tauran, which no one had seen at this point. Haldeman keeps the mystery strong with his telling of the tale of interplanetary war. Some of the technology could have been updated. I don’t recall the collapsar jump being discovered in 1998. It’s up there with the launch of Khan’s ship the Botany Bay (not to mention his rule over the earth and the cause of World War 3, or World War 3 itself.) on my list of things I didn’t remember about the ‘90’s. But this is a great read in both novel and comic book format. Both mediums capture the senselessness of war and the feeling of loss when companions die. Plus, the sense of loosing part of your own soul on the battlefield and the period of re-adjustment when the soldier returns home. It’s a remarkable story and I am very pleased that it made it to trade paperback format.

Marvano must be a big Joe Haldeman fan because his attention to detail on this tale is top notch. He captures each character’s soul considerably well and brings us three dimensional characters, all of whom have a story to tell. The first few pages of this issue reminded me of Frank Millar’s Dark Knight Returns with the news broadcasts bringing the reader necessary exposition. The space ships are excellently rendered, and modern-day look make it seem almost less like Science Fiction and more like the day to day NASA work force, except, of course, for the alien ships. The Collapsar jump brings us to the alien battlefield. It’s a unique way for the heroes to travel considering that warp speed and hyper speed were taken. The life forms on the enemy world are simple, not complex, with the first creature they run into looking like a mini-brontosaurus. This art work is great in it’s simplicity and helps make this trade an easy read. It’s great stuff.

The horrors of war are not easy to live with. Which is why the government has implanted a post-hypnotic suggestion into these marines to help them carry out their mission. What it leads them to do is barbaric, but it helps them to accomplish their goal. Will Earth defeat the Taurans? Will our hero’s make it home alive? Will it matter much in the end? This is a great tale and it ends on a poignant note. I don’t want to give it away as always, suffice to say that time is irrelevant in the grand scheme of things. Awesome adaptation of a stirring story. 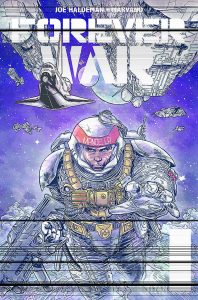