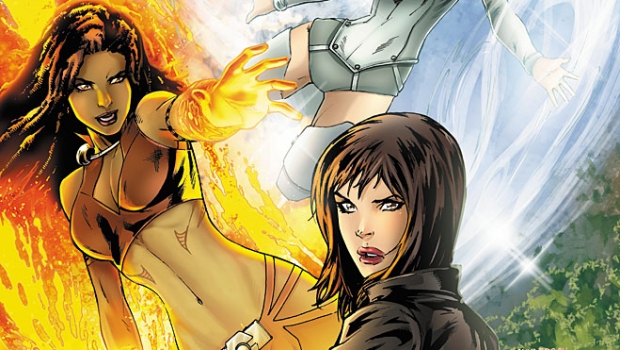 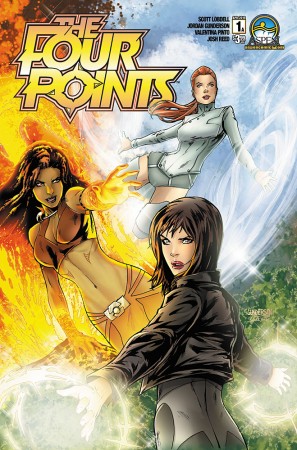 Gia Sorrentino is the First Daughter of the Earth—or at least that what she keeps telling her psychiatric home-health attendants when she’s not staring out the window of her room, endlessly quoting snippets of dialogue from television shows. But as it turns out, she really is a daughter of the earth—in fact, she’s one of the four elementals that we meet in Aspen Comics’ The Four Points #1, from writer/creator Scott Lobdell (Uncanny X-Men, Generation X, Teen Titans), penciler Jordan Gunderson (Fathom Annual #1, Executive Assistant: Assassins), and inkers John Ercek and Mark Roslan.

Aiding Gia is Howard Conklin, the Sorrentinos’ lawyer, who acts as the pseudo-Bosley for this superpowered Charlie’s Angels, overseeing The Point, a top-secret facility set up by Gia’s late parents that’s equal parts Area 51, Warehouse 13, and the trophy room in the Batcave. He explains that “something dark is coming”—something that involves people around the world melting into lumps of flesh.

So for reasons not made clear, and despite Conklin’s advice that she not get involved in whatever is coming, Gia travels the world to assemble a team of fellow supers, starting with an air-controlling Russian pilot named…Ivana Ghoul (Jesus—“I Want a Ghoul”? Seriously? I thought it was Stan Lee’s job to come up with terrible names these days.). Then it’s on to the South Pacific, and an island where the fire-controlling Ara pretends to be the goddess of a volcano…in a scene that’s straight-up borrowed from Storm’s introduction in Len Wein and Dave Cockrum’s Giant-Size X-Men #1, back in 1975. As for the fourth member, I don’t think I’m spoiling anything by saying that the water elemental is none other than Aspen Matthews, star of Aspen Comics’ numerous Fathom titles and the character around which the late Michael Turner built his company.

The questions of why Gia sought out Ivana and Ara, how she knows they’re fellow elementals, or why only elementals are capable of handling the darkness, are never answered beyond a vague “that’s the way it’s always been” response. Also, if Conklin told her to stay out of the Point’s business, then how did she acquire information on the other three? And how is she able to use The Point as their base of operations?

Artwise, Gunderson and Co. do a good job in terms of storytelling and—a welcome surprise—drawing supporting characters who aren’t hot women or steroid-pumped men (a problem quite a few of today’s artists suffer from), but their two-page spreads don’t really present anything that couldn’t have been shown in a single page. For example, the spread used to depict a bland dogfight involving Russian fighter jets is clearly meant to be there just to hide the reveal of one of the elementals when you turn to the left-hand page that follows.

Bottom line? Is The Four Points worth picking up? It’s hard to tell, given the first issue’s generic plot and lack of any real depth. Lobdell has certainly written better stories, so perhaps the second issue will provide the meat that the bones of this debut could certainly use. Head down to your local comic shop, take a look, and decide for yourself if The Four Points is worth your Four Dollars.