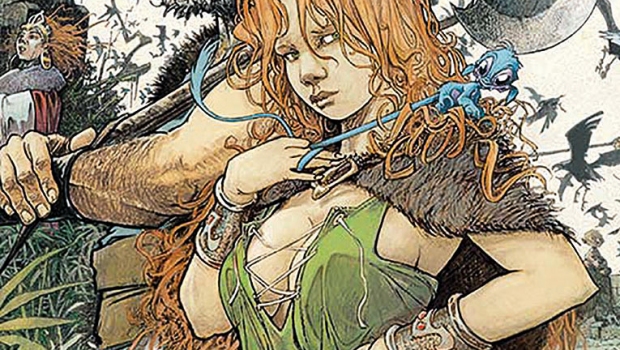 Review: The Quest For The Time Bird HC 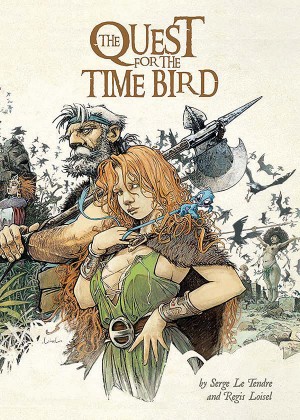 Never out-dated, quality and style, this collection is an epic fantasy that needs to be in the hands of every fantasy-fan in the world.

Having said that I jumped into this collection, thinking it was “just” a translation of a French classic, but imagine my surprise when I found out this tale was from the mid Seventies. The art, the coloring, the style and the sheer quality does not feel like a dated tale, but more like a tale that will never go out of style!

So much for the official synposis. In essense this is indeed the tale of a quest, where 2 guys (one old and one weak, yet both anti-heroes) and one sassy lady are in search of that one thing that might save the world as they know it. A world that is so diverse and so detailed-written and so well-thought, that it indeed needs to be saved from the dooming apocalypse.

Pelisse is a tough lady, with more then only outfits that scarcely cover her ‘assets’ during their adventures. Her curvaceous figure is the true eye-candy, but she also uses it to make sure things are going according to her own plans. I mean this not in a sexist way, but in a bodacious and brave way.

The good thing about this story is that it makes you think. Gradually half-way through the story makes a change in point of views, where readers get a chance to redefine the reading experience and go a step deeper. Adding to this an ending which a lot of readers (me included) will NOT see coming and you can bank on this being a part of your ever-lasting collection of must-haves in your man-cave (or female variant of sorts).

This story was translated from the French series “La Quete de l’Oiseau du Temps” in English in the late Eighties by NBM as “Roxanna & the Quest for the Time-Bird” in 4 volumes.
In the originating country of France there were also volumes 5-8, which serves as a prequel to the translated version.