Free Comic Book Day is upon us and Valiant has a sneak peek at a couple of their titles.

The first one is Shadowman. The story opens in New Orleans and the local kids are getting sick, so an old man named Isaiah is leading Alyssa into the swamp to investigate. Then we take a look at XO Man O War. Aric is attempting to return to earth after the turmoil he left on Gorin. And we’re treated to a peak at Harbinger Wars 2 which brings us into present day Los Angeles. Agent Blake Newsome approaches Amanda McKee concerning urgent business with the Deputy Director concerning events in Oklahoma City.

Andy Diggle and Matt Kindt have an interesting look at Voodoo and mysticism in New Orleans and Alyssa is up against a lot more than she expected when a huge creature emerges from the swamp to threaten her. It looks to be a strong lead in to what is definitely a job for Shadowman. Matt Kindt and Ariel Olivetti’s sneak peek is a bit harder to get into since we don’t see much of what Aric is up against other than his attempt to reach earth, the art however is spectacular! The final peek from Harbinger Wars 2 is the most interesting as Amanda is made to feel pushed into a corner and is almost alienated from the organization. The Deputy Director is trying to convince her that her people, the Psiots, need to stop hiding and make themselves known to the public, but after an altercation with the police the Psiots are naturally unwillingly to comply. This third sneak peek is the most revealing, all three titles look like they’ll be great reads, but my interest is mostly in the third tale where we’re made to wonder if the Government has the Psiots best interests at heart or is their something more sinister afoot. All the artists bring us top notch imagery in the Valiant style and that alone makes our mouths water for the ever-reliable Valiant universe.

The Valiant universe has always produced top notch material and I really enjoy most of their titles and this one’s a freebie, so you can’t go wrong to pick it up at your local comic book store. I want to know more about the titles they sample in this edition, which, of course, is what a sampler is supposed to do. So, it’s mission completed, and I will obviously be picking up these titles and probably review at least one or two of them, but until then this is a good intro into what’s coming. *** (8.7 rating) 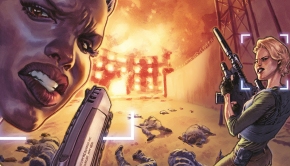