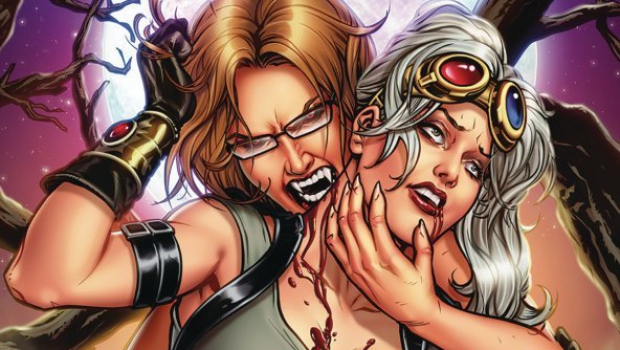 This issue opens in the past with a lady named Elizabeth about to give birth. Then we see her packing to leave. It’s a bittersweet moment as she is trying to escape her fate. But her fate catches up to her.

Raven Gregory gives us a chilling, graphic opening scene to this issue. The lengths some people will go too in order to protect their reputation can be inhuman. It’s a look at an antagonist that is cold and calculating. The intensity increases over the previous issue and makes this a fascinating yet enjoyable tale about love gone wrong. The origin of Dracula’s daughter is just as terrifying as her very existence. Great stuff includes Liesel warning her protégé about using the serum that she seems to be dependent on and the clue that Dracula gives his infant daughter before he leaves.

Allan Otero really delivers some incredible panels here. They are graphic and horrific at the same time. This issue is definitely not for the squeamish. From the way, he envisions the horrors of Charlotte’s childbirth to the shock ending that creeps up on you. His panels are some scary stuff! Highlights include the fate of Dracula and his kin and the sobering final page of this issue.

This story just picked up the pace for our heroes and their plight is about to kick into high gear. The odds are seemingly impossible for the vampire hunters to succeed. Liesel’s nightmare on the airplane is more than just a premonition, it’s a way of life for these strange and mixed up creatures. After the plane lands our heroes head to a pub where…to be continued.

VAN HELSING VS DRACULAS DAUGHTER #4 (OF 5)

Synopsis: Helsing finally comes face-to-face with Dracula’s Daughter and learns the truth behind her nemesis mysterious origins. Origins that will shake Van Helsing and her universe down to its core. Don’t miss this action packed issue brought to you by the fan favorite creative team from Revenge of Wonderland, writer Raven Gregory and artist Allan Otero. 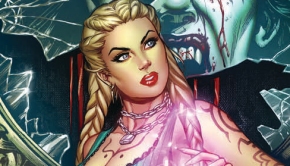