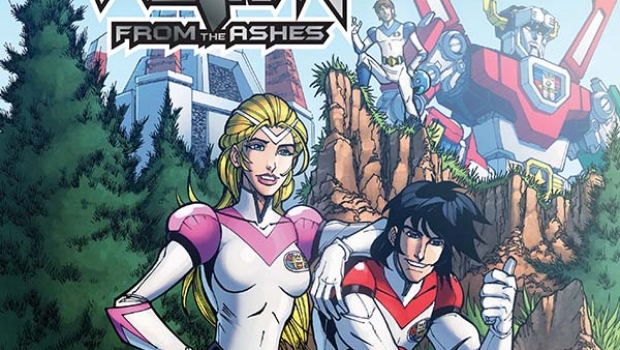 What I find amazing about the Voltron character is that, given the success of the Michael Bay Transformers movies, no one has adapted this for the big screen yet. It has all the ingredients of a block buster. A giant robot and it’s quirky team. I’m betting Dynamite is wishing for someone to produce this since they hold the license to do the comic book version and that would mean considerable sales increase in the product (providing that it’s a hit.)

After a great battle (I believe witnessed in the previous issue) a group of humans are stranded in the rubble and it’s up to team Voltron to save them. Can they evacuate these unfortunate souls before the robeasts return to destroy them? you’ll have to buy the issue to find out!

Spoilers: The team looks around at the battle they had won, but they realize that it was at great cost. The city is in ruins, just like Metropolis in Man of Steel. This battle is epic and covered almost 200 years as the people of Earth awaited the Return of Voltron. After the victory, Jayce is made the pilot of the Black Lion. He humbly accepts this position but points out that “The heroes are the ones that didn’t come back.”

The B-team is successful but can they live up to the greatness of their predecessors? They’d better learn quick because Gr’rwar is not about to give them a minutes rest!