Review: War for the Planet of the Apes

Usually the third installment of a franchise is weak, but not this time. Remarkable performances (Andy Serkis deserves to at least be nominated for an Oscar for his performance as Caesar,) spectacular effects and incredible direction plus breath taking cinematography.

Reeves handles this tale well, in other hands it could have been a mess, but the pacing is great throughout the film and one simply cannot take their eyes off the screen. I couldn’t even get up to relieve myself I was so riveted on what was happening.

The story takes place several years after the previous film and the war Koba started is raging. In addition to the mainstay apes that have been featured throughout all three films, like Maurice (Karin Konoval) and Rocket (Terry Notary,) there are some interesting new characters as well, including an albino ape they call Winter (Alex Paunovic) and Bad Ape (Steve Zahn,) a kind of hermit that was living in the zoo after the outbreak from the original film. We see the humans tangle with the apes even after Caesar offers them a sort of cease fire. And, what’s this? There are apes fighting alongside the humans against other apes!?! Why would apes join the humans who are trying to kill them? The answer is shocking and adds tension to the proceedings. Not all apes trust Caesar’s leadership. Every Jesus has his Judas and every Caesar has his Brutus. The Colonel (Woody Harrelson) has gone insane and Haralson evokes Marlon Brando’s performance from the classic Apocalypse Now I always thought Harrelson was an underrated actor and anyone who doubted his abilities has to see this film. The characters all strive to save their sanity in a topsy turvey world gone mad. We can see clear motivation from all, even those considered villains. Great stuff!

Several homages to the original are once again strewn throughout the movie including the human soldiers dubbing themselves the Alpha-Omega’s (after the doomsday bomb in the second film,) and a little girl that is found by the apes being named Nova (Taylor’s girl from the first film) when they find a name plate from an old Chevrolet car.

Even though we can kind of see where this is going the stunts, effects and action keep you riveted and there are some nice twists and you honestly won’t expect the end results of the war turning out the way they do. Without giving away too much, I’ll just say that the ending is bittersweet. One of my favorite cinema going experiences ever! ****

I’ll leave you with this video from Watch Mojo chronicling the history of the Apes Saga from 1968 to present, for those new to the franchise:

War for the Planet of the Apes 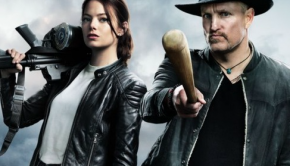 Given to me: “Youtube show” and Planet of the Apes! →

Review: Tarzan/Planet of the Apes →