A native of Belfast, Ireland, Logan Patrick O’Connell, fought the drug war on his home turf. A mistake drove him from home, after that, he would meet Merlin. The Magician is involved in his own war, the war of the grail.

Joe Brusha opens this chapter of the story on the Devil’s Playground, Bourbon street, New Orleans. We’re in a sleezy strip joint where a patron is in the private room with a sexy blonde when all hell breaks loose. Goons from the order of the Tarot have tracked down our protagonist and they come crashing through the window of the aforementioned gentleman’s club. Brusha brings us an unrelenting pace that picks up our story and reveals new secrets about the order of the Tarot. The thing that keeps the reader going all the way to the end is the secrets that are revealed about Zodiac’s past which our protagonists take advantage of in a creepy way. As O’Connell takes on this missions’ antagonists, which include zombies as well as the goons from the order of the Tarot, he’s bombarded with memories of his past, a past which shaped him into the mercenary he is today. And he’s not happy about it. Great stuff includes the revelation as to who is behind the order of the Tarot and the historical revelations behind Logan’s motivation.

Daniel Maine elevates this story to new heights as more of Zodiac’s past is revealed. Great art helps to bring the tale to spirited life and Maine’s attention to detail is strong and compelling. Highlights include the splash where Zodiac takes down his second adversary and the rise of the Zombies.

Zenescope’s protagonists are usually female, and I love reading and reviewing them, but it’s refreshing that they can still bring us a male protagonist every now and again. The tension mounts as the antagonist of this tale wages a spirited attack on our heroes’ psyche by digging up his past. It’s an effort to weaken him as he appears more than capable of defending himself against their onslaught. That is until… to be continued. 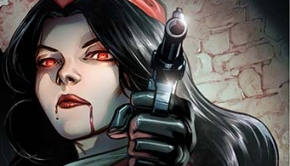