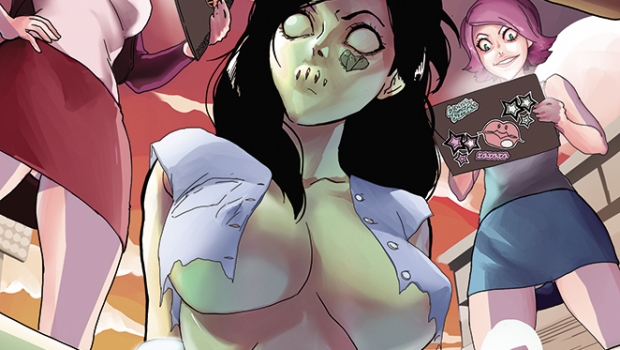 The variant cover of this issue immediately reminded me of an old B movie called Angel which was quite good in it’s own cheesy way and even spawned two sequels. This story is The Craft meets Carrie. In the opening scene our protagonist is out and about at night, trying to avoid some smart ass class mates who don’t believe in her powers, they obtain her necronomicon and, in a show of making fun of her (they are obviously not believers) start reading and casting her spells out loud. Big mistake!

Just to note, this comic, despite it’s appearance, isn’t for kids. It’s language is graphic and there is nudity. The zombie in question returns to her home, or rather to the girl whom she is possessing, Bea’s home, and goes to bed, only to be awakened in the morning by Bea’s sister. She calls Bea’s father Ted, which is his name but he thinks he’s talking to his daughter and becomes upset, since she should call him dad.

Dan Mendoza and Jason Martin infuse the story with an even amount of humor and horror that keeps the reader wanting to turn each page. Our protagonist, the demon possessing the girl Bea, is kind of an antihero along the lines of Ashe in the Evil Dead series, only with supernatural origins. She’s just trying to get by but no one will leave her alone, but in a reversal of Evil Dead it is the mortals who are the antagonists. Great fun to say the least.

Victoria Harris brings a manic energy to the art work. One scene stands out in particular when she’s in class and her teacher, Mr. Palm, asks her History questions to which she responds “I don’t know.” Mr. Palm then gives her his own “I don’t know,” as In “Mr. Palm will I pass this class,” and he replies to his own question “Gee Bea, I don’t know.” the look on Palm’s face is hilarious as he mocks his student and the whole class responds with laughter. The look on Zombie/Bea’s face is equally funny as she gives him a dumbfounded expression from Hell.

All in all, this scene reminds me of a reversal of a scene in Damien: the Omen part 2 where the teacher throws a bunch of dates at Damien and he knows every single one of them, as if he’s lived them all.

A must read for all fans of Horror/Comedy. ****