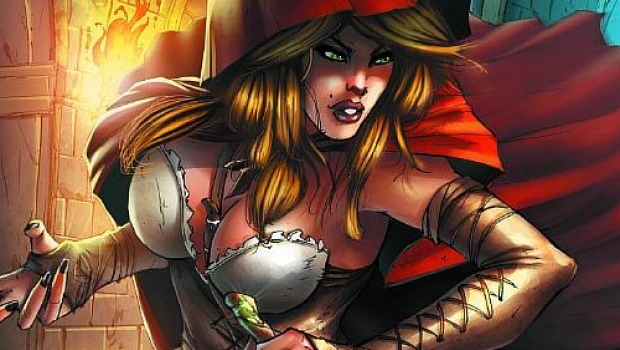 Zenescope has been dishing out myths and legends, mixing them with tongue-in-cheek and some cheesecake, but also with a grim atmosphere and sometimes even some gorefest.

They’ve put together a vast universe in which mortals, god-like creatures (called Highborns) and their offspring (the Falsebloods), band together for either the good or the bad in a fight that centers around the Earth, but also to the realms of fantasy called Myst, Neverland, Oz and Wonderland.

Red Riding Hood started out as a story in Grimm Fairy Tales and continued in the 30-issue spanning story from the Myths & Legends series, where she developed into a vigilante with a vengeance, with a tendency to turn into a werewolf herself if she loses control.

Robyn Hood’s story started in her own mini-series in which Robyn even fled Myst, after getting her revenge. Too bad her revenge was… spoiled… and RRH caught Robyn’s ‘scent’ and believed her responsible for many killings.

In true comic-fashion a nice dialogue was formed between the two characters, using weapons, feet and fists and “the chase” was on…

The true FUN part of this comic however, made possible through the extra page-count to 39, is the switch of the hunt as well as the way Robyn ultimately comes up as winner to this fight. You won’t find any surprises here, but it’s a really nice transitional comic between the first Robyn Hood series and the new series to start in May 2013.

What this oneshot also delivers, is an eagerness to catch up on the complete story of both Hood-characters, if you do not already own those!