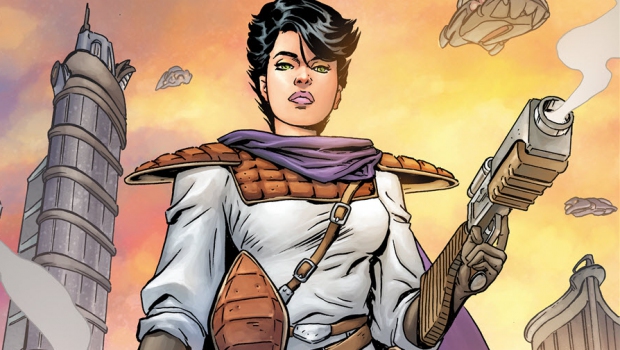 When it debuted in 1987, Ron Randall’s sci-fi epic Trekker broke new ground with the adventures of Mercy St. Clair, a badass bounty hunter in the violent and complicated world of the 23rd Century. Now Randall is launching his most ambitious Trekker Kickstarter yet! Trekker: The Complete Journey Vol I. Oversized Deluxe Hardcover aims to collect the original out-of-print volumes first published by Dark Horse Comics, for a mind-blowing 450+ pages of story and art—many in color for the very first time. It’s the only way for Trekker fans to experience the original tales of this series in a premium, full-color format.

“I’m very excited to get this volume out, and reclaim all of these “lost” stories in a format that serves them—and fans—best,” said Randall. “As always, I’ll need the support of the whole Trekker community to get us there, and I’m doing everything I can to make it worth that support!”

This is Randall’s fourth Kickstarter, after successfully funding three others with a 100% fulfillment rate! His record of success is both a testament to his incredible work ethic—Randall consistently has all of the work done and ready for print before his campaigns are funded—and his smart choice of partners. As with his previous campaigns, Randall is working with Blackbox, the fulfillment company behind Cards Against Humanity, to ensure rewards are delivered by August 2020.

Trekker: The Complete Journey Vol I. Oversized Deluxe Hardcover will measure 11” x 7” and is available for $50. Additional rewards include a limited-edition print, original art, and even a one-on-one “making comics” consult with Randall himself! Check it out by February 20 at http://www.trekkerkickstarter.com.

Over the past 30-plus years, Ron Randall has created comics for every major comics publisher in the United States and worked as a sought-after artist for REI, Disney, Nike and Lucasfilm. In addition to his creator-owned saga, Trekker, his art has graced the pages of Astro City, Catwoman, House of Mystery, Sgt. Rock, Batman, Alan Moore’s Swamp Thing, and more.

Set in a retrofutristic 23rd Century, Trekker has been delighting fans of badass bounty hunter Mercy St. Clair for more than 30 years. As Gail Simone (Wonder Woman, Batgirl, Deadpool) wrote: “It’s of stuff like Trekker that revolutions are begun. A female character that is sexy but not sexualized, that is tough but not without flaws and doubts, and that is dangerous but not without compassion.”