Glamorous super-spy thrills from the master of the modern pin-up, Des Taylor!

Kidnapped and held for ransom as a teenager, billionaire fashion heiress Scarlett Couture subsequently trained in hand-to-hand combat and intelligence skills under her rescuer, Lt. Spencer Kelly, to ensure she’d never be held captive again. After learning that her mother was a former spy for the C.I.A., Scarlett now uses her mother’s global fashion company as a cover to bring the world’s greatest criminals to justice! 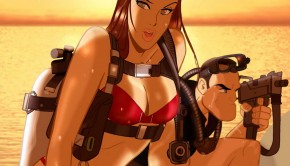 The Scarlett Couture Collection Hits The Streets This December 2015 →