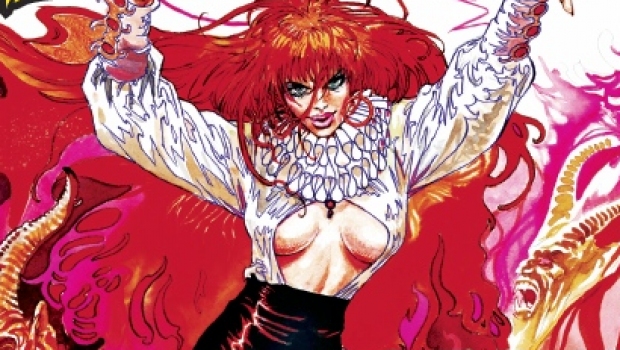 Steven A. Roman, publisher of StarWarp Concepts, including titles like Lorelei and Pandora, shares his confessions of his love for the females in comics with C4S.

I think it all started with King Kong, this love affair with horror—Kong…and Fay Wray. (They say you never forget your first scream queen…)

As a kid growing up in New York during the late ’60s/early ’70s, one of the local TV stations—WOR/Channel 9—had a tradition of running Willis O’Brien’s giant monkey movie every Thanksgiving; exactly why the station’s program director might have thought it ranked as a “holiday” movie like It’s a Wonderful Life is something I’ve never been able to figure out.

Not that it mattered to me at the time—regardless of the bizarre logic behind its yearly airing, you’d still find me camped in front of the set, the air in the house heavy with the aroma of turkey and fixings, watching as Kong lumbered out of the jungle (in that endearing, mildly jerky way that only stop motion animation can provide) to put his damned dirty ape-paws around the waist of Fay Wray.

Maybe it was the sight of a big monkey fighting dinosaurs that first entranced me; maybe it was the scenes of Kong rampaging through the streets of New York; maybe it was the famous climax at the Empire State Building, where we learn “t’was beauty killed the beast,” not the biplanes that riddled him with bullets; maybe it was Ms. Wray’s ethereal beauty. Whatever it was that drew me in, I’d unwittingly received my baptism at the altar of horror, and there was no going back.

The following years were filled with similar appearances at “services” that I attended in this underground religion, too numerous to count. But there are a bunch that I can remember as though they’d just happened yesterday—events that all served to influence my writing in some form or another, decades later . . .

• Plopping down in front of the TV after school for WOR’s Million-Dollar Movie, where you’d occasionally find treats like Them!, It Came from Beneath the Sea, The Beast from 20,000 Fathoms, The Queen of Blood (an inspiration for Vampirella), and Tarantula.

• Discovering the wondrous talents of Béla Lugosi in Dracula, Boris Karloff in Frankenstein, Lon Chaney, Jr. in The Wolfman, Claude Rains in The Invisible Man, and Vincent Price in The Pit and the Pendulum. (Was TV programming back then awesome, or what?)

• Losing myself in the horror titles that flooded out of Marvel Comics back in the day: Tomb of Dracula, Werewolf by Night, Frankenstein’s Monster, Ghost Rider, Son of Satan, Man-Thing, Monsters Unleashed, and Haunt of Horror. Seeing the word “succubus” for the first time, in reference to the Son of Satan’s sister: Satana, the Devil’s Daughter. (A word I’ve put to good use since then, with my own succubus character, Lorelei.)

• Sitting in a movie theater for The Golden Voyage of Sinbad in 1974, and watching Sinbad and his men getting their asses kicked by an animated statue of the Hindu goddess Kali. Of course, the movie was an even bigger treat with the continual screen presence of Caroline Munro in her slave girl outfit. (Yes, it’s true: You don’t forget your second scream queen, either…)

And then there came a moment that made quite an impact on my life: stumbling across a copy of the magazine Vampirella #55 on a newsstand. A quick glance at the cover might have made you think it was one of a dozen “adult” magazines on the racks, but the title caught my eye, and the store owner didn’t give the high-school-age me a hard time about buying it, so I snapped it up. What an eye-opener! Nifty stories about a vampire girl from outer space—and she walked around half-naked, too! A female vampire fighting monsters, wearing only a one-piece swimsuit and go-go boots—could comics get any better than that?!

Vampirella led, in turn, to a discovery of the companion titles, Creepy and Eerie, and then to the granddaddy of the Warren Publishing magazines: Famous Monsters of Filmland. Holy hell! You mean there are other people out there who enjoy this stuff?

Vampirella also pointed me in another direction: In an interview given years after scripting the series, legendary comics writer and editor Archie Goodwin admitted his stories had been heavily influenced by the works of author H. P. Lovecraft—replace the Necronomicon with the Crimson Chronicles, the Cult of C’thulu with the Cult of Chaos, and you’re just scratching the surface. Well, of course I had to check out this Lovecraft guy…

So, where did all these influences—and this mad love affair with the bizarre—ultimately lead me? Well, as I often tell people—including Famous Monsters and Vampirella creator Forrest J Ackerman, on the one occasion I got to meet him (and act like a tongue-tied fanboy) before his passing—if there hadn’t been a Vampirella, there probably wouldn’t have been a Lorelei or a Sebastienne Mazarin. And if there hadn’t been an Annie, there never would have been a Pandora Zwieback to fight monsters with.

I think it has something to do with the circle of life, only without the Elton John lyrics…

It’s all pretty much a throwback to the horror movies and comics I grew up with, but, hey, it’s what I’ve always wanted to do, and if other folks—like you—are into it, too, then all the better, right? Of course, if I’d really wanted to succeed in today’s market, I could’ve whipped up some kind of Twilight knockoff—it’s what everybody else in publishing is trying to do.

But horror can be a harsh muse, one who demands as much respect and attention and commitment as you’d give to a real-life woman (except a lot more stabby when she gets pissed), and she doesn’t like to be compared to—or asked to dress like—other girls. Sure as hell not after she’s given so much to you over the years…

Love. It can really screw you up, y’know?

STEVEN A. ROMAN is the bestselling author of the novels Blood Feud: The Saga of Pandora Zwieback, Book 1, X-Men: The Chaos Engine Trilogy, and Final Destination: Dead Man’s Hand. He also wrote the graphic novels Lorelei: Building the Perfect Beast, Lorelei: Sects and the City, and Sunn. Follow his latest projects at StarWarp Concepts.