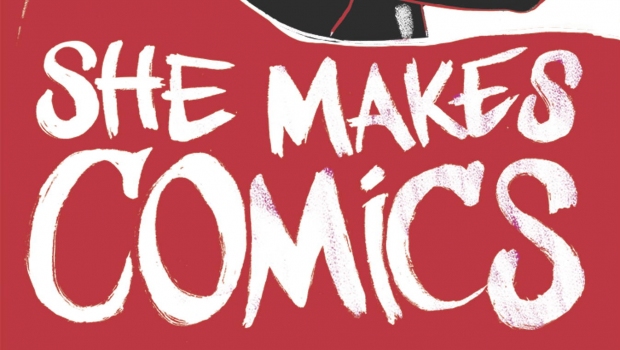 Sequart and Respect Films are proud to simultaneously announce the production of a brand new documentary about the history of women in comics and a Kickstarter campaign to help fund it.

She Makes Comics busts up the “boys’ club” of the comic book world, telling the story of women in the comics industry and in fan culture since the Golden Age of the medium. This film will trace the history of women in comics from its early days, when the majority of readers were, in fact, women. It will explore the early contributions female artists made to superhero comics in the ‘50s and ‘60s; the explosion of underground feminist comics in the ‘70s; the maturation of comics in the ‘80s overseen by several key female editors and executives; and the modern age of indie comics and fandom, where artists and fans thrive in ever-growing communities. For the first time on film, female creators, fans, retailers, and scholars will tell their stories in a celebration of creative passion and barrier-breaking storytelling.

The film will be produced by the same Sequart / Respect team behind the critically-acclaimed documentaries The Image Revolution, Grant Morrison: Talking with Gods, Warren Ellis: Captured Ghosts, and Comics in Focus, Chris Claremont’s X-Men.

We have turned to Kickstarter to help fund She Makes Comics. This is your chance to support discussion about the merits of comics and to help document the story of the women who’ve had a part in shaping comics history.

“We’re really excited to produce a film that will hopefully inspire a new generation of creators and fans and show women that there is a place for them in comics,” said director / producer Marisa Stotter.

Co-producing She Makes Comics is Karen Green, the comics / graphic novels librarian at Columbia University. “To bring all these women together – these smart, creative, powerful women – telling their stories, telling the history of women in comics, this stands as such an amazing example to women out there, to girls out there, that there are a lot of women in this club. And there’s always room for more.”

Rewards include the documentary as a DVD and / or digital download; original artwork created exclusively for the film by Courtney Wirth, Colleen Doran, and Jill Thompson; and a get-started comics art kit that is perfect for an aspiring artist. Rewards also include books and feature-length films from Sequart’s catalog.