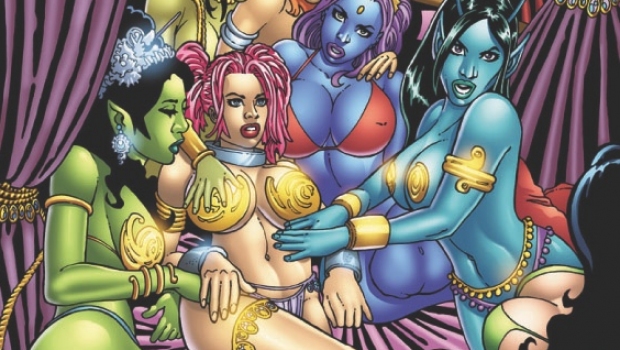 The SLAVE GIRL from Planet X is going to be a fun and sexy sci fi romp through space! We follow the Slave Girl, Adara, thru her trials and tribulations with the evil alien overlords on the Slaver World and find out about Planet X, the mysterious and dangerous planet the Slave Girl came from.

Adara is the only known survivor of the mysterious planet! But with a secret hidden on the planet, she might be the only one who can save the universe! The known galaxy is on the edge of oblivion from the galactic menace known only as the Void.

But she’ll have to escape her captors first. She’ll use her cunning and guile and if that doesn’t work she’ll strip out of every shred of clothing she has! All to save the galaxy!

In the beginning of our story for SLAVE GIRL from Planet X , our heroine Adara finds herself captured by slavers and thrown into the slave pits of Orthos, an alien world on the outer edges of the known universe. Home for thieves and criminals, vile slavers and alien bounty hunters, the scum of the universe.

The Slave Girl quickly finds out that the slave pits of Orthos are no place for a lady. They are as deadly as they are disgusting! All manner of alien and beast occupy the dungeons of Orthos and Adara will be lucky to escape with her life!

The Slave Girl will find allies among the alien harem girls of slave planet’s overlords! Together they must band together to overthrow their evil masters. The harem girls will use everything they know to distract their captures in order to escape!

But will it be enough to help the Slave Girl escape with the fate of the galaxy at stake!?!

Or will she be dragged back to the slave pits! Never to escape! And the galaxy doomed???

All this and more awaits you with the SLAVE GIRL from Planet X !

Now available directly from creator/artist Clint Hilinski, via his Kickstarter.