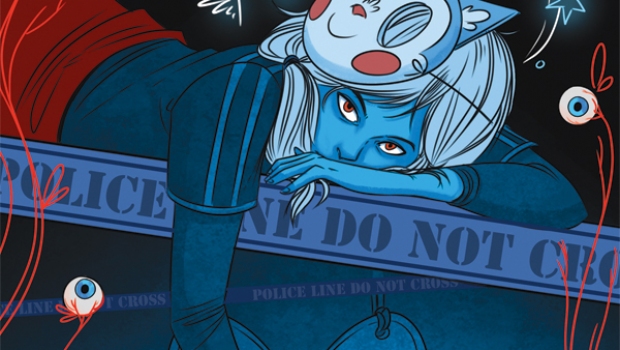 Sold Out TOMBOY Prepares To Lash Out in TPB

Action Lab Entertainment knows when it has something special in it’s hands. M. Goodwin, the artist who first helped launch the Eisner nominated series, PRINCELESS, to life has once again worked her magic with her solo series, TOMBOY. The creator owned series, the first two issues of which have been sold out, is now being released in trade paperback form on Wednesday, March 16th.

In TOMBOY: DIVINE INTERVENTION, the death of a friend catches sixteen year-old, Addison Brody, off guard, but a chance encounter with his killers on the subway forever changes her life. Crime cover-ups, dirty cops, and magical dead boyfriends consume her life as she’s thrust into the vigilante lifestyle, and murder becomes her after school activity.

Logan Dalton of PopOptiq said “Tomboy #1 successfully combines the Magical Girl and vigilante genres through Mia Goodwin’s art with manga-style figures to go with the grisly images of dead bodies and spattered gore and mix of bright and cold colors depending on the mood of the scene.” and Brett of Graphic Policy said “This may be one of the best debuts of the year. An absolutely amazing first issue. Can’t wait to read more.”

TOMBOY: DIVINE INTERVENTION collects the first four issues of the Action Lab: Danger Zone mature readers series and is available through your local comic shop via item code JAN161004 and hits shelves this Wednesday. TOMBOY issue 5, the first issue of the second story arc (and a great jumping on point), is in the current March Previews catalog for May release and available for pre-order now via item code MAR161000 (or MAR161001 for the Winston Young variant cover).