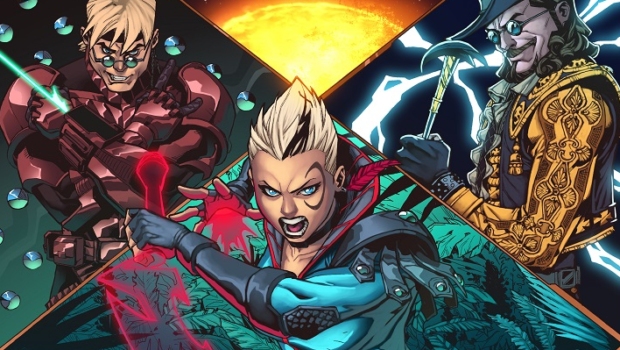 Frontera is set around a Universe where humankind has freed themselves from enslavement by an alien species and are now at the highest echelon in the Universe. It deals with a young woman Makota and her journey in that Universe.

Frontera: Flash of Dawn is written by A.J. Kinkade, pencils are by Myk Emmshin, Colors are by Everardo Orozco, letters are by Erek Foster, cover pencils are by Carlos Gomez and edits are by Laurie Foster.

Frontera: Flash of Dawn is a 10 issue mini series, however is part 1 of a total 9 book series and will also have spin-offs of titles that will be about other characters that exist in the Frontera-verse.

” I have been wanting to create something like this for years.” Kinkade says ” I love science fiction and comics. I could someday see this as a movie series but that will not be for a few years.” This will be Kinkade’s first comic writing credit but he hopes that it will not be his last.

“I have always loved comics, since I was a little kid.” Kinkade says. “I remember seeing and reading the first one, an Iron Man comic, but I bought it because he was fighting with the Hulk underwater on the cover. The TV series is why I became a comic fan.” Kinkade points to movies such as 5th Element, Star Wars, Guardians of the Galaxy and tv series such as LEXX and Babylon 5 as influences, but his influences in sci-fi comics come from Starstruck, Grim Jack, and Howard Chaykin’s AMERICAN FLAGG!. “ I just love great sci-fi comics. I need to read more sci-fi novels.” Kinkade says.