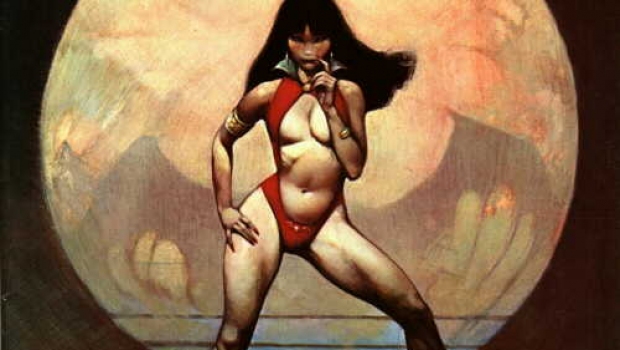 It was in September 1969, forty-five years ago, that the horror-comic world was introduced to Vampirella, the blood-sucking femme fatale from the planet Drakulon (an outer-space vampire!) created by Famous Monsters of Filmland founder Forrest J Ackerman and designed by artists Frank Frazetta and Trina Robbins. At the time, Vampirella was like no other character in comics: part Carmilla and part Barbarella, a little Bettie Page, and a whole lot of Playboy Playmate, all mixed with a liberal dose of the 1966 SF-horror movie Queen of Blood (about a space vampiress, and co-starring Ackerman in a small part). The minimal amount of clothing she wore—a one-piece bright-red swimsuit and black leather go-go boots—had a lot to do with the attention she received.

But Vampi was much more than just a skimpy costume and a pair of fangs. In her introductory tale, written by Ackerman and illustrated by Tom Sutton (later known for his horror comics work on Marvel’s Ghost Rider, Werewolf by Night, and Man-Thing), we learn that Vampi hails from the vampire-inhabited planet Drakulon, where the rivers run red with (literal) blood—but Drakulon is dying, the rivers drying up. Just as all seems lost, a United States spacecraft arrives to investigate the planet. Consumed by hunger, Vampi drains the crew and commandeers the ship, which is programmed to return to Earth. And before you know it, there’s a space vampiress stalking the streets of America, in search of prey. (See where that Queen of Blood influence came in?)

After that, Vampi was relegated to hosting duties in her magazine, introducing short horror tales in the tradition of Tales From the Crypt and Vampi’s “brother” magazines, Creepy and Eerie. That all changed, however, when in issue #8 new writer/editor Archie Goodwin (a comics legend even at that stage in his career) set Vampi on her path as a monster hunter, often battling the Cult of Chaos, a worldwide group of Elder God worshippers that Goodwin based on the works of H. P. Lovecraft’s “C’thulu Mythos.” And when Sutton was replaced as artist by Spanish sensation Jose “Pepe” Gonzalez, Vampirella became a character no one would ever forget, even when a lot of the post-Goodwin stories couldn’t measure up to the art. More than Goodwin, it was truly Gonzalez (and cover painter Enrique Torres, aka Enric) who left a major impression on Vampirella and her fans; even today, Gonzalez remains the gold standard by which all modern-day Vampi artists are judged.

As I’ve often stated, if there hadn’t been Vampirella to serve as inspiration, there might not have been my succubus character, Lorelei—who’s celebrating her own 25th anniversary this year, and who stars in the Vampi-esque graphic novel Lorelei: Sects and the City, in which Lori battles a cult of Elder God worshippers looking to unleash hell on Earth. And not only have I had the pleasure of working with artists associated with Vampirella—Bob Larkin, Esteban Maroto, Tom Sutton, and Louis Small Jr.—but I actually had the opportunity to thank Forry Ackerman in person for the inspiration, at the 2004 San Diego Comic Con. Admittedly, I was a little tongue-tied when I met him, but I managed to get the words out. And both Forry and Vampi’s original publisher, James Warren, complimented me on Lori when I sent them each a copy of Lorelei, Vol. 2 #1, in 2002.