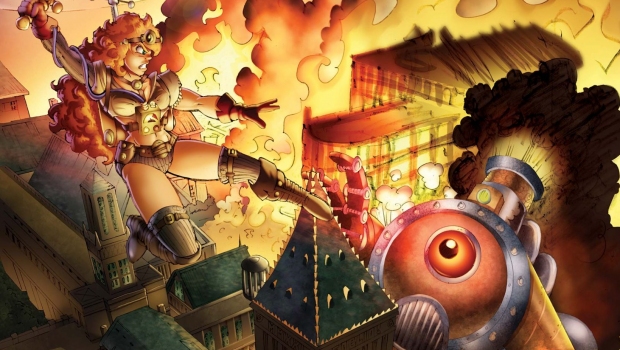 Good news for Red Sonja fans! Phil Foglio is working on a special, steampunk She-Devil with a Sword comic. The project was announced by Dynamite on January 21, and it is being launched on the Indiegogo platform.

Some Red Sonja fans may not be familiar with Phil Foglio’s work, but he’s the imaginative creator behind a number of comic strips, books and series published since the late ’70s. Whether it’s his What’s New strips that graced the pages of Dragon Magazine in the heydays of Dungeons & Dragons; his adaptation of Robert Lynn Asprin’s Myth Adventures novels published by WaRP graphics; his Buck Godot science fiction series; or his ongoing, multiple Hugo Award-winning Girl Genius series (written and drawn in collaboration with his wife, Kaja), Phil Foglio has been a fan favorite for over 40 years, and I can’t wait to see how he tackles Red Sonja on the cover of that special edition.

I first experienced his signature work in 1979 in the pages of Startoons, a paperback collection of sci-fi-related cartoons edited by Joan Winston and published by Playboy Paperbacks. The Star Wars cartoon featuring Han Solo and Chewbacca on the cover made me buy the book, but the strips by Foglio inside were what made me turn every page of that paperback. Foglio’s strips in the book poked fun at sci-fi conventions. I had not attended my first sci-fi convention yet, but Foglio’s humorous, behind-the-scenes take on sci-fi conventions was what attracted me to fandom. That paperback is over 40 years old now, but it still sits prominently on my bookshelf; not far from the framed sketch Foglio drew of me and Aahz (the character from Myth Adventures) at a convention in 1986 and that stills hangs on my office wall. (Yeah, I’m that much of a fan.)

It was interesting to see his work evolve and how he approached different projects over four decades. Whether his work features characters adapted from other books (like Stanley and his Monster in the DC comic book of the same name, or Skeeve and Aahz in Myth Adventures) or his own creations (like Phil and Dixie, or Buck Godot), he always brings something fresh to the genre, and he remains unwaveringly funny and captivating. Foglio is one of those rare artists that have managed to stay relevant for over four decades, and I predict that his Red Sonja will be a refreshing take on the character. The She-Devil with a Sword has been reimagined by a number of artists over the years. I’ve been reading her stories since the Marvel Comics days. Dynamite took the characters down new roads when they started printing Red Sonja stories in 2005. Dynamite has been very productive—and creative—when it comes to alternate covers for the book series. I feel the stories and art have become somewhat stagnant over the past few years, but the many different covers on the various Red Sonja books rarely fail to impress. Foglio bringing his signature style to the She-Devil with a Sword is welcome news, and I haven’t been this excited about Red Sonja since the release of The Ballad of the Red Goddess by Esteban Maroto and Roy Thomas or the announcement of the reprint of Red Sonja #1 featuring a cover by Greg Hildebrandt.

A Dynamite press release published 25 January states that multiple variants of the book will be published. The standard option will feature Foglio’s full-color illustration and Dynamite’s trade dress and logos. An alternate “virgin” edition will be printed without the logos. Black and white versions spotlighting Foglio’s intricate lines will also be printed. I think we can look forward to a book that all Red Sonja fans will want to add to their collection. Looking at the preview cover art revealed by Dynamite earlier this week, my only question is, “when can we expect to see a full limited series drawn by Foglio?”

According to Dynamite, this will be a limited-edition collectible comic. It will launch on Indiegogo and fans can sign up in advance to receive updates and be able to back the project the moment it launches. (You can check it out here: www.indiegogo.com/projects/phil-foglios-fantastic-red-sonja-steampunk-edition.)