BEST FRIENDS FOREVER is a clever dark comedy and sci-fi horror movie, combining equal parts heartfelt road trip buddy film and apocalyptic disaster story, with two badass girls. Harriet, a perpetually optimistic comic-book artist, dreams of escaping her past in Los Angeles and hits the road for a new life in Austin, Texas. She drags Reba her seemingly devil-may-care BFF, along for the ride. After nuclear bombs explode in four cities, the girls are forced to ask: When faced with the end of the world – what is most important to you? 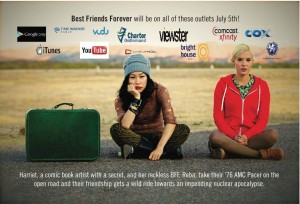