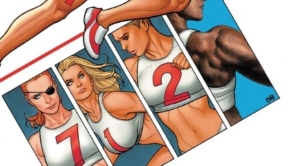 AWA Studios has provided C4S with a preview to Frank Cho’s FIGHT GIRLS, as they are eager to let everyone