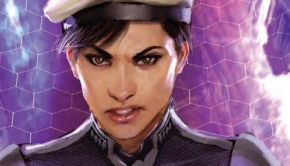 The first issue of the new Top Cow series TALES OF HONOR by Matt Hawkins with art by Jung-Geun Yoon,

The blurb makes sense: “The Sci-Fi sensation series Honor Harrington gets its debut in the comic world on March 5th,