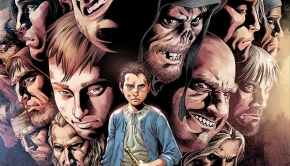 This issue opens with Arya having her hair cut and now being called a boy, Arry, by Yoren. the neighborhood