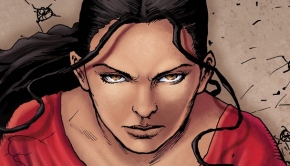 Titan Comics has provided C4S with a preview to Heroes Godsend, out in stores on March 9, 2016. HEROES: GODSEND