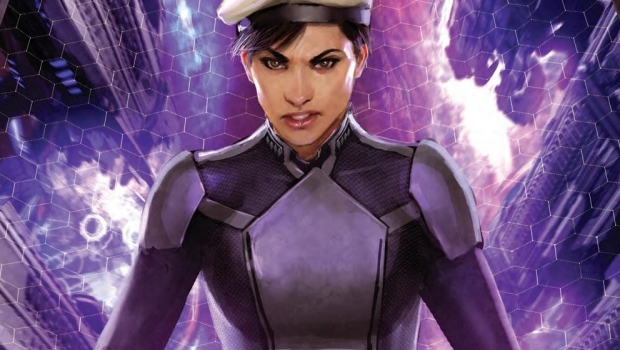 The first issue of the new Top Cow series TALES OF HONOR by Matt Hawkins with art by Jung-Geun Yoon, which is based upon the bestselling military science-fiction novels by David Weber, has sold out instantly at the distributor level and will be going into a second printing. This issue’s immediate sell-out marks the successful launch of a multi-platform Honorverse initiative that will also incorporate digital games, apps, television episodes, and a feature film spearheaded by Evergreen Studios.
Praise for TALES OF HONOR:
“Tales of Honor #1 was just a delight to read, with great characters, a three-dimensional universe and a generously deep source from which to derive material.”
—Jesse Scheckner, Florida Geek Scene
“Overall Tales of Honor is a solid introduction to a multi-decade spanning series.  It’s impossible to relay the full scope of novels in a single issue of a comic but it appears like Matt Hawkins and Jung-Geun Yoon are approaching the material with the utmost respect and that will surely go a long way in ensuring the true flavor of the universe shines through. ” —Rhymes with Geek
“Tales of Honor is a brilliant introduction for new fans of the Honorverse, showing brilliant characteristics from the titular character. Highly recommended.”
—John McCubbin, Unleash the Fanboy
“I find myself interested where this artistic marvel is headed. The need for heavy exposition was evident, but broken up with promises of both action and intrigue by the bits of foreshadowing dropped in amongst them.” —David Hinspeter, Comic Booked
“This comic is compacted nicely into an opening issue and has given me the appetite to read issue #2 to find out more of the story which is unfolding, and the history that has brought Honor to this point.” —Villordsutch, Flickering Myth
“Hawkins has done a fine reboot, allowing you to jump in now, and enticing you to go back and read the previous twenty novels as well.” —Brad Gischia, Bag & Bored
TALES OF HONOR #1 has completely sold out at the distributor level, but may still be available in comic stores. It is currently available digitally on the Image Comics website (imagecomics.com) and the official Image Comics iOS app, as well as on Comixology on the web (comixology.com), iOS, Android, and Google Play.
Image Comics is pleased to announce that this second issue will be going back to print to meet customer demand. The second printing of TALES OF HONOR #1 (Diamond Code FEB148000) will release on 4/16.
TALES OF HONOR #2 releases 4/9 and will be available for pre-order with Diamond Code FEB140635. A special variant cover featuring art by Patrick Tatapoulous can be pre-ordered with Diamond Code FEB140636.