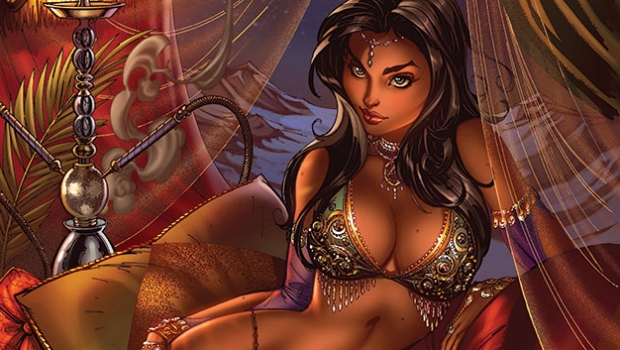 When ComicsForSinners heard about the new and exciting series from Shahrazad, C4S decided to spend an entire week in this magical land, Big Dog Ink has created. And since a party of this size and exposure would not be complete without a word from The Top Dog Tom Hutchinson himself, C4S caught him on that rare occasion in between taking over the comic book world, in which he had a spare minute to talk to us.

COMICS FOR SINNERS: So tell us noobs about Shahrazad and then about YOUR version.

TOM HUTCHINSON: Shahrazad is of course the Arabian Queen from 1001 Arabian Nights, who told stories to keep herself alive. But while other stories concentrated on the fantasies she created, we [at BDI] are instead focusing on Shahrazad herself. At its core, Shahrazad is a fantasy adventure story, but what it really is is an exercise in creativity. We have a concept and back story for Shahrazad in place, we have an over-arching storyline that will thread all of our stories together over time but the idea is to tell a writer what we have in mind and just say… go! It allows for some amazingly creative stories that will at first not make complete sense as there will be quite a bit of genre mashing going on, but trust me, it’s all there for a reason.

C4S: What makes Shahrazad by the BDI team so interesting?

HUTCHINSON: First is the art team. Mike Krome and Nei Ruffino are producing artwork that is off the charts. The detail in lines and color is mind-blowing to me and the attention to detail and character designs etcetera will make this a visual treat for everyone. Second is the stories themselves. We are not going to be restricted to a basic continuity timeline. We can go anywhere, any time and do just about anything with Shahrazad and that will always keep the book fresh from story to story.

C4S: How did Shahrazad came to be?

HUTCHINSON: This has been a long process. It began as something I was going to do on my own. A new book with some similar concepts but a completely different back story to it. Basically Shahrazad grew form via those small beginnings and blossomed as I talked with Brett Cate about some of the things he wanted to do with a comic book and our mutual love of some of the art styles and design that came out of the 90’s (books like Danger Girl, Fathom and the Tenth) which were very exciting and beautiful to look at. So we took the last year and put together a concept that we felt would allow us to use those types of things in a series that would be able to take advantage of some of those elements we loved and bring them forward to the present. It’s hard to talk about it without giving away some of the secrets 🙂

C4S: How was it to work on Shahrazad and what was your role?

HUTCHINSON: I was creating the book and characters along with Brett Cate and Nei Ruffino, who got her two cents in whenever we had some time to include her. Working on it was fun but difficult in that that things we were trying to tie together and create weren’t always cooperating with us and of course everyone always has their own thoughts about what they want so there was a lot of back and forth till we all felt we had something that had a solid base to it. The collaboration part is always fun for me. That’s what comics are about. I also wrote the Prologue issue, or the #0 issue if you will. And I became sort of the story editor as far as the ongoing series is concerned. Kim Hutchison and Kari Castor (our editor) are both writing the first story arc of the ongoing series and I basically oversee what they are doing and try to direct the action so to speak to fit into some of the visual cues we needed to place into their story. Once we all got together and brainstormed out the first issue or two they were off and running and writing and I just edited some content as needed to streamline it.

C4S: How many issues will Shahrazad be?

HUTCHINSON: This is an ongoing series straight from the get go. It will be told in story arcs but as I have said; the arcs will tie together in ways that you may not even notice until later.

C4S: So how did you approach the other collaberators?

HUTCHINSON: This book is for anyone who has a creative bone in their body. We have talked to a few writers about upcoming arcs already and all of them immediately understood what this was and they wanted to get on board. This book is pure fun. Amazing art, colors, design, and a world to play in that you can really let go and enjoy yourself in the process. That’s what we do at Big Dog Ink. We look for ways to make comics fun again.

C4S: So you mentioned Shahrazad to be genre-blending?

HUTCHINSON: Well to keep it simple and not to ruin any secrets, you can see in the #0 issue that we present a number of environment splashes with lots of characters. Some of those characters have no place in those environments… and yet they are all there on purpose and for a reason. Nothing in any story will be out of place. So if we have a science fiction story that takes place on an orbiting space station, we may have the inhabitants of the station be a mix of egyptians, or vikings or whatever we want. And it will make sense (at least in some ways) for it to be that way. Some stories will be more straight forward and not have such huge timeline blends like that, that’s just an extreme example. But there is an allowance for such things, and a way to understand why which will be revealed as we go along.

C4S: How did you approach your tale to tell?

HUTCHINSON: Well the story I wrote was a very simple beginning. It takes place in the way we know and understand Shahrazad as the Arabian Queen but it quickly flows right into the genre blending that will make this book something really special to look at.

C4S: The design is very specific. How did this came to be?

HUTCHINSON: Design is everything in comics. And in many books it is sorely lacking. We are proud of the designers we have on board with us and we pay attention to design maybe to the point of ridiculousness. In this book especially, with so many different settings and characters, design is more important than ever to keep things looking “accurate” to the story and ultimately cool to look at.

C4S: So there you have it, folks! Go tell everyone that C4S brought you the scoop of scoops (two great writers, who happen to be female as well, will take over after Tom is done with his Prologue story!) as well as an insightfull look into the workings behind a new series!

And do NOT forget to enter into the CONTEST, everyone! 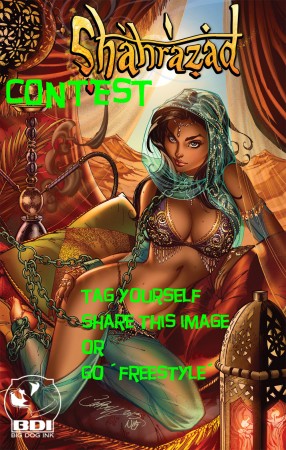