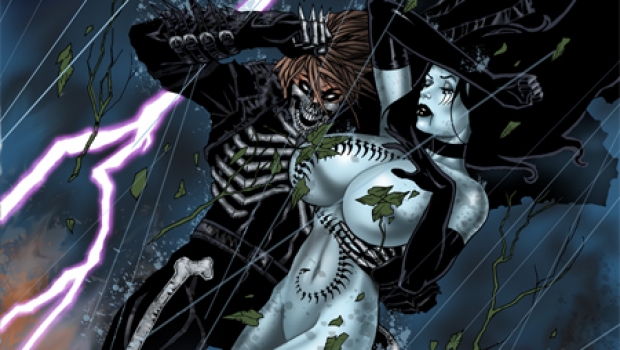 Broadsword Comics have been revealing their new Studio and Skyclad covers for Tarot, Witch Of The Black Rose #80.

Broadsword Comics announced that the latest issue of Tarot, Witch of the Black Rose, issue #80, available for pre-order now for a May 2013 release.

Lighting, hurricane gales and drenching rain assault Raven Hex and The Skeleton man as they close in on the Dark Faeries that abducted Tarot.
The two get on each others last nerve as they invade each other’s personal space.
Secrets are reviled in this too close for comfort situation.

Art By Jim Balent
MATURE Viewer
Deluxe Litho Plate Edition Comes Bagged and Boarded includes a copy of Tarot#80 (either A or B Cover) and a b/w 6.5″x 10 ” litho of Raven Hex, titled ,”If All You See… “.

This Limited Collector’s Litho penciled by the Artist himself, Jim Balent!
Comes Signed by Artist. Limited to a printing of 500.

As always this issue is being created with TWO Jim Balent covers and is available for pre-order at Jim Balent’s website.