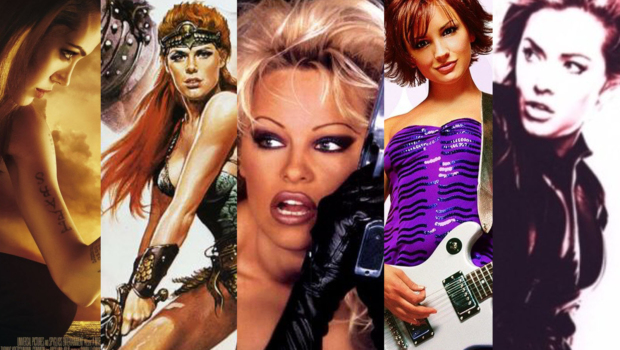 I use BABE in the most philogynistic fashion possible, but it just is hard to come up with a catchy title, right?! The content of this post however was very easy. I love movies and I love comic books and I adore strong, female characters so I am here to show you comic-based movies with a female lead, even some which you might never have thought off before and now might check out, both on the screen as well as the paper version!

Sometimes these movies can be hit and miss, like visiting a casino but sometimes you will find that perfect gem and it will feel like Vegas in Summer!

Without further waiting I want to present to you a listing in chronological order even. My cherry-picks so to speak!

Comic book: Red Sonja: The She-Devil With A Sword (1973-present)

Originally Red Sonja appeared in the comic-series/magazine-formatted Conan The Barbarian, and after a few seasons via publisher Marvel Comics she was put on hiatus. But when publisher Dynamite Entertainment took the rights to this character a few years ago, the comic has been nothing but monthly, with many crossovers (Tarzan, Spider-man…) and even steampunk-series.

On screen Brigitte Nielsen played the scarlet heroine, with husband Arnold Schwarzenegger (who had 2 succesful movies as Conan himself) as Lord Kalidor. Schwarzenegger called it “the worst film I have ever made.” and we will leave the comment here to simmer on into eternity…

Hopefully the 2019 movie will get to set new standards.

And there was Pamela Anderson… the blonde that made it bigtime via the TV-series Baywatch (she even was a cool cameo in the 2017 reboot) and then made herself even bigger in breast-size, who was the lead actrice in Barb Wire. The plot of both the comic and the film is very loosely inspired by the 1942 classic “Casablanca” with Anderson replacing Humphrey Bogart as a nightclub owner – this time in 2017, during a second American Civil War. In all fairness, Pamela is a far more buxom in presence than Bogart, and wears a lot more leather, boots and corsets.

2017 also marked a new comic book series, so do get that as well as the omnibus reprinting all the out-of-print comics!

The comic had some amazing extra features, aside the overgrown amount of violence and gore which seems Mark Millar has a trademark on, besides being one of the best writers out there! The comic had cloned superhero’s, a villain made of shit and the intensity to boot!

A new movie is planned! Review on C4S

Comic book: Sabrina The Teenage Witch (1962-present), with a new horror-title aimed at MR coming out since 2017.

Sabrina first appeared in Archie Comics in 1962, and has had a long list of incarnations since then, including a manga version in 2004. Her original scantily-clad appearance was toned down for the film and TV-series, but the jokes still were abundant.

Recently Sabrina was the talk of the town with a new reboot, set in a more horror-setting as well as more Mature Readers oriented. Not only Sabrina (dark witchcraft) but also Jughead (werewolf), Veronica (vampiress) and the cast of Archie (zombies) are re-imagined in these new comic book series. Look for them under the Archie Horror imprint!

Steve Lieber and Greg Rucka’s original four-issue comic book series made inspired use of white space on the page, much like Frank Miller in Sin City and 300 and more, and Whiteout was successful enough to spawn various sequels. Kate Beckinsale tried to make the movie as interesting but sadly it only lived for one incarnation. Somehow the nitty and gritty did not translate well enough, this time round.

We add some scandal, some absurd eroticism and a loose story about a semi-feminine persona. And it went on to become a classic!

Atomic Blonde is a 2017 American action thriller spy film based on the 2012 graphic novel The Coldest City, which revolves around a spy who has to find a list of double agents who are being smuggled into the West, on the eve of the collapse of the Berlin Wall in 1989. The film is directed by David Leitch, in his first solo directorial credit, and it is written by Kurt Johnstad. The film’s cast includes Charlize Theron, James McAvoy, John Goodman, Til Schweiger, Eddie Marsan, Sofia Boutella, and Toby Jones.

A sequel is currently in development. (source Vanityfair)

JOSIE AND THE PUSSYCATS

The movie was not bad actually. GO out there and get it!

The movie was a backdoor pilot for a possible television series, which was eventually approved. The Painkiller Jane TV series appears to be a “reboot” of the TV-movie, discarding the film’s backstory and starting anew. It starred Kristanna Loken as the title character for one season of 22 episodes.

The comic about the bi-sexual, hard-hitting, drug-riddled, yet indestructable (super healing powers) undercover-agent Jane Vasko, with her 22 Brides group of female vigilantes has been a hit. Never a miss. With crossovers with Tucci’s SHI, Vampirella, The Terminator, Mike Mignola’s Hellboy, Randy Queen’s Darkchylde, Punisher, and Top Cow’s The Darkness as well as 6 mini-series this is a classic everybody needs to read!

The TV-movie, the comic book series and the TV-series all share the same basic edgy Vasko but all have also many differences. Enjoy each version! And I personally cannot wait for the new 2019 movie!

It is good to be a fan, read comics and go to the movies! 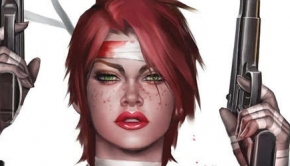