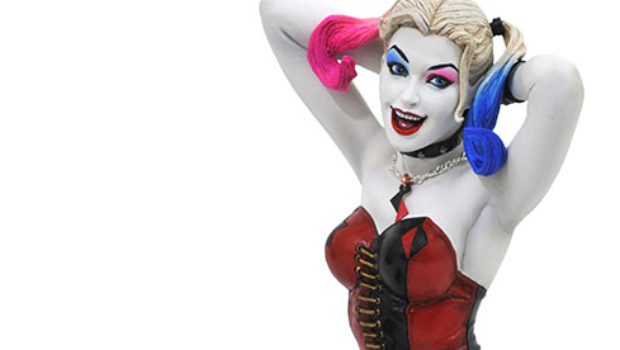 Diamond Select Toys’ Gallery line of PVC dioramas is expanding into new worlds! After exploring the worlds of DC animation and DC television, the Gallery has found a home in the DC comics universe! Capturing the comic-book looks of DC’s greatest heroes and villains, each 9-inch PVC diorama is sculpted in the 9-inch scale, with varying heights depending on pose and environment. Featuring dynamic designs and scintillating sculpts by today’s greatest artists, and the first few in the line are available for pre-order through your local comic shop or favorite online retailer! 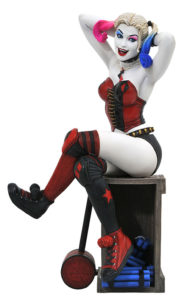 Harley Quinn is the woman of the hour, the year and the decade, and the first DC Comics diorama captures her latest comic book appearance, with her corset, trademark hammer and red-and-blue pigtails! Sitting atop a crate of dynamite, Harley measures approximately 8 inches tall, and is made of high-quality PVC plastic with collectible-quality painted details. Designed by Shawn Knapp and sculpted by Jean St. Jean! (Item #MAR182419, SRP $45.00)

DST brings out the big guns with the second DC Comics Gallery, this superior sculpt of the Man of Steel! Sculpted in a 9” scale, this approximately 9” statue of Superman features detailed sculpting and paint, and comes packaged in a full-color window box. Designed by Shawn Knapp and sculpted by Joe Menna! (Item #APR182181, SRP: $45.00)

A Batman who laughs is a Batman who wins! From the pages of Dark Nights: Metal comes the Batman Who Laughs, the leader of the Dark Knights, a team of evil Batmen from across the multiverse. This fully Jokerized Batman debuted at C2E2 in Chicago, stands about 9 inches tall, and features a detailed sculpt with exacting painted details. The high-grade plastic statue comes packaged in a full-color window box. Designed by Caesar and sculpted by Alterton! (SRP: $45.00)

Future comic-shop/specialty store releases include Batman, Aquaman, Supergirl, Flash, Catwoman, Green Arrow and Shazam! One per month will go up for pre-order, with monthly releases starting in late Summer 2018. GameStop stores will also get in on the action with a few exclusive-debut figures, of Green Lantern, Nightwing and The Joker, which will ship in late 2018 and eventually make their way to comic shops.

Get in on the DC Gallery line at the beginning and pre-order the first few releases now! Order through your local comic shop, or your favorite online retailer! Find a store at comicshoplocator.com, or check out the line at shop.diamondselecttoys.com/dc-gallery!