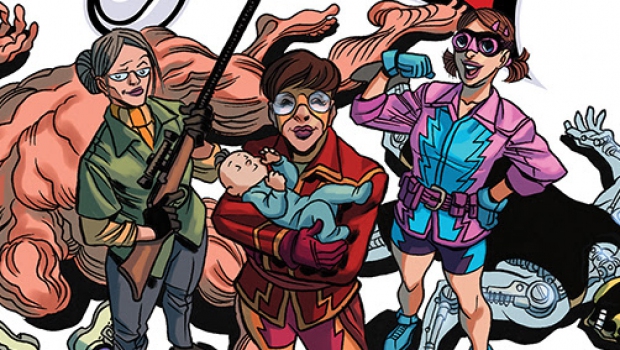 The first SUPERMOM story arc is available on comiXology

Superhero Voltra is out to stop her arch nemesis Vincent Croupe from trying to take over the world. There’s just one problem: she’s pregnant… and he’s the father. Cue the world’s strongest mother versus the world’s evilest father fighting over the fate of mankind and their child. If that’s not enough there’s also terrifying monkey clowns, giant flesh monsters, pyromaniac romantics, a superhero baby shower, the fact that the baby might be taking after daddy and 100 other problems for Voltra to survive in this action comedy filled with big laughs, crazy fights and a shocking twist or two.

Websites like Pullbox gave the book a perfect 10/10: “With a snappy pace, some solid dialogue, and a great artistic flair, the entire team on Supermom has put together a really solid opening issue suitable for teens and up…” Big Comic Page added: “A fun, lively start to a new superhero action comedy series…”

The first volume is currently in the Previews March 2020 Preorder Catalog. Order it with Diamond item code MAR201454 so you can pick up a physical copy!