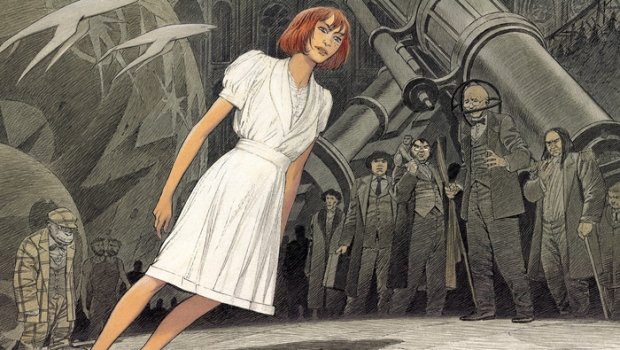 Internationally Acclaimed OGN “The Leaning Girl” Launches in the USA

After over a decade, the world-renowned, multi award-winning graphic novel series, Les Cités Obscures (The Obscure Cities) returns to the United States with The Leaning Girl, a classic story translated into English for the first time.

Mary Von Rathen is with her family in Alaxis when during a ride on the Star Express the world shakes. Afterwards Mary is leaning. Doctors can not help her and she is sent to a private school in Sodrovni. Mary is not happy at the private school and she escapes. She joins the Robertson Circus and stays with them for some time. Until she hears from Stanislas Sainclair that Alex Wappendorf might be able to help her. Wappendorf is working on a rocket to reach a planet that might be the cause of all Marys trouble. Mary decides to join Wappendorf in the rocket. They reach an area with many globes.

Meanwhile an artist called Augustin Desombres has ran away from the busy world and buys an empty building on the Plateau of Aubrac. He starts painting murals. Soon he find himself on the same globes as Mary.

Writer Benoît Peeters and artist François Schuiten, the creative team behind The Obscure Cities series, have teamed up with US publisher Stephen Smith’s Alaxis Press to bring one of their most important stories, The Leaning Girl, to the English-speaking audience for the first time.

Smith, a longtime fan of the series and of the creators, licensed the rights to the entire series from Casterman Editions, Belgium, owners of the classic international comic series TinTin, and publisher of Les Cités Obscures since the debut volume, Les Murailles de Samaris (The Great Walls of Samaris) in 1987. He then proceeded to translate the volume himself.

“I have been surrounded by the very best in commercial and fine art throughout my career,” Smith said. “But after seeing the film, HUGO, I realized it was important to bring the incredible European comic strip art form to the US and to the English-speaking public.”

“This is my opportunity to share these great stories and beautiful art with the American market,” Smith added.

When the earlier volumes were published in English, the graphic novel format was still considered very much a lowbrow medium relegated to comic book shops. Following the successes of Pulitzer prize winner, Maus, by Art Spiegelman, Persepolis by Marjane Satrapi, and The Invention of Hugo Cabret by Brian Selznick, the graphic novel has become an accepted literary form. The Obscure Cities is an excellent almost Kafka-esque storytelling by internationally acclaimed author and biographer, Benoît Peeters, and stunning visuals by François Schuiten, whose visual sensibilities contributed to the looks of such films as Taxandria, The Perils of Gwendoline, The Golden Compass and the 2012 science fiction masterpiece, Mars et Avril.

The Leaning Girl is the first graphic novel to be produced under Smith’s new imprint, Alaxis Press and will release in October 2013.

The Kickstarter link is here.