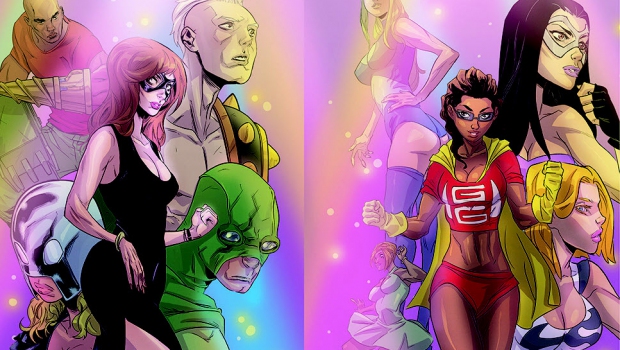 On a drunken whim, Ruby landed a pair of power-inducing super-tech glasses from her college’s resident brainiac; but rather than impressing her friends, Ruby alienated the majority of her (largely mean-girl) clique while klutzily trying to demonstrate her new-found abilities – accidentally knocking drinks over their expensive designer dresses. Her BFF Summer James was into what Ruby could do now, though – and pushed her into trying to be a super-hero (jokily giving her the moniker ‘Geek-Girl,’ following her klutzy actions).

Johnson brings us up to speed on the, now-ongoing, Geek-Girl series – which has its New Story Arc ‘Tights ‘n’ Capes’ on Kickstarter now… “Ruby has grown from a superficial ‘It Girl’ into a fully-fledged super-hero – stopping ‘big bad’ Lightning Storm trashing her city of Maine, and turning the tide on the crime wave that erupted in the wake of the destruction Lightning Storm caused – which had left a hole in Maine’s law enforcement. This has lead to former super-tech weapons dealer Johnny Carlyle inviting Ruby to head a new Super-Team he’s putting together…”

Johnson continues, “Things take an unexpected turn with Johnny and the Super-Team, though… So Ruby, Summer and new team-mate The Minger – now getting a night off – meet Ruby and Summer’s (mean) girl friends for an outlandish fancy-dress club nite. Ruby wants to go anonymous, so Summer gets to go in the Geek-Girl costume and glasses – with powers!

“But while the girls are out to have fun and let their hair down, a guy with red skin and his young female associate are tailing them, someone is contacting the dead, Johnny Carlyle’s right-hand man Digger Mensch is having conflict with his super-villain pals ‘cos of being involved with the super-team – and there’s the introduction of Cabra Cini: Voodoo Junkie Hitwoman!” says Johnson.

Concluding, Johnson says, “Geek-Girl’s new direction began in the Jump-On-issue, Geek-Girl #5 (also available at the Kickstarter, along with all previous issues and TPB’s), and the new 2-part arc running through #6 & #7 will really bring the character development and weirdness I’ve wanted to introduce to Geek-Girl’s universe. This is a great time to get on board!”

The Geek-Girl Kickstarter is Live from now until March 31, and you get to it at www.geekgirlcomics.com

“Grade A. Back and even better. Fans of indie superhero comic books will find a winner in Geek-Girl.” Leroy Douresseaux, I Reads You.

“The story has some amazing character-driven moments, I was really impressed with the diversity in the cast, and the art is fantastic.” Rob Andersin, Indie Advocates.

“A charming comic, the dialogue displays a witty back and forth that would make Kevin Smith proud.” –Kris Bather, Broken Frontier.