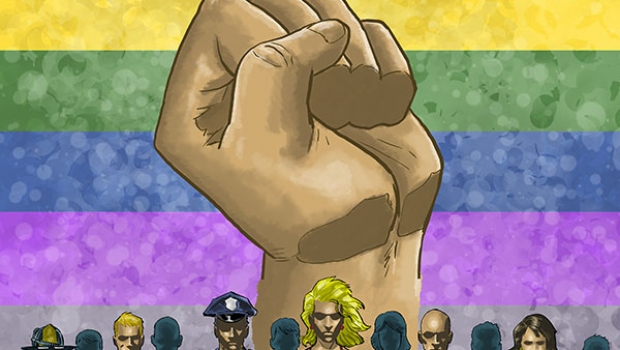 All men are created equal, but not treated as equals.  Civil Rights are synonymous with American birthright. Until EVERYONE has the same rights, the fight for equality continues.
In June of 1969, police raided The Stonewall Inn, an alternative lifestyle bar in New York.  Tired of being ostracized for being who they are, the men, women, transgendered and street kids fought back. This event launched what most consider the modern equality movement that the LGBTQ continues to fight to this day.
Civil rights are not just an American tradition; it is a birthright, it is engrained in the DNA of our shared cultural understanding of self-identity. It comes in all colors, shapes, genders, political views and social choices. And each has had its touchstone moments. Rosa Parks’ refusal to move to the back of the bus, the standoff at Wounded Knee, the passage of the 19th amendment…and the Stonewall Riots.

Not familiar with the Stonewall Riots? For many, this single moment in 1969 was the flashpoint for the modern gay movement. It was the first time members of the homosexual community were not content to be treated as second class citizens-forced “into a closet” by an intolerant public. Facing persecution, prosecution and a violation of their civil rights, the LGBTQ community was mad as hell and they weren’t going to take it anymore.  The events at Stonewall lead to riots and demonstrations to open the dialogue and fight for the basic human rights of the LGBTQ community.

Will you please share our campaign and help bring the story of Stonewall to life in this unique comic book history format? We really need your help to make this a reality, not only for the LGBTQ community but a great biography that needs to be told.
Here is the link to the campaign: http://bit.ly/15NQqGg