The Women of Dynamite Crossover With Red Sonja, Vampirella, Dejah Thoris, and more With Gail Simone - Comics for Sinners
News 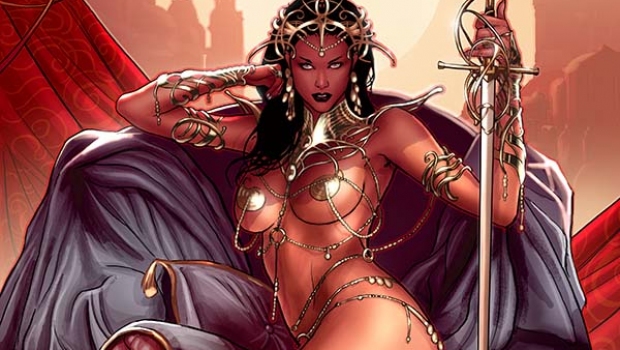 Dynamite Entertainment is proud to announce an exciting new event series featuring the most iconic female characters published by Dynamite, as written by sensational comics scribe, Gail Simone. Renowned for her deft handling of DC Comics’ best-known and most powerful women (Batgirl, Wonder Woman, Birds of Prey), Simone will unite and celebrate the strong female characters of Dynamite’s publishing line, including Red Sonja, Vampirella, Dejah Thoris, and more, in a series currently under a working title of The Women of Dynamite.

The heart of The Women of Dynamite is formed by the three bestselling heroines – the female triumvirate – of Dynamite’s line as the central characters: Red Sonja, Vampirella, and Dejah Thoris. The “She-Devil with a Sword” known as Red Sonja, is fantasy fiction’s most prominent female character, formerly a swashbuckling ally of the Robert E. Howard character, Conan. Vampirella, originally a horror hostess in her self-titled magazine, evolved over her forty-five year history into a supernatural detective. Finally, Dejah Thoris is the eponymous heroine of Edgar Rice Burroughs’ original story featuring John Carter, A Princess of Mars, and an adventurous mainstay at Dynamite with the publication of such series as Warlord of Mars and Dejah of Mars. Additional female characters from Dynamite’s ten years of publishing will be included in the event.

“When I first spoke with Nick about working at Dynamite, he graciously offered my choice of a huge list of great characters, and I immediately chose a favorite, Red Sonja.” Says Writer Extra-Ordinaire Gail Simone. “But that meant leaving behind amazing characters I loved! So doing this big, fun, noisy event book, full of action and fun and drama and sex and villainy, featuring some of the wildest female characters out there, that’s just awesome. Getting to work with some of the most talented female writers in the industry only makes it better!”

“After working so closely with Gail on Legends of Red Sonja, I am excited to see where we’ll be going next with this epic character crossover,” says Molly Mahan, Associate Editor of Dynamite. “The concept of a Women of Dynamite series has been something we’ve been circling around for a while now, but had to wait for the right concept and creators to come together to make the story as worthwhile as the concept. We are lucky to have Gail as the cornerstone on this project and I know we’ll craft something that the fans and comics community will enjoy across demographics.”

“Gail has been an absolute pleasure to work with,” says Nick Barrucci, CEO and Publisher of Dynamite Entertainment. “The thought of bringing together the strongest female characters that Dynamite publishes in to an event has been discussed for years, and we could not be happier that Gail is the creator who will tell this tale. Her work on Red Sonja has been a delight, and as fans who read her work know, she has many tricks up her sleeve. Gail is going to make this event HUGE! Just wait until you see what she has in store for the rest of Dynamite’s strong female characters.”

Gail Simone first debuted on a Dynamite series with the 2013 launch of Red Sonja, an ongoing series which was met with immediate critical acclaim and an impressive sell-out of its 35,000-unit first printing. She has committed to writing chores for Red Sonja through its eighteenth issue. She also assembled a team of fiction’s top female writers, well-respected professionals from the prose, fantasy gaming, and comic book worlds, for a collaborative project called Legends of Red Sonja, celebrating the 40th anniversary of the titular character. She additionally will contribute a story to the upcoming Vampirella: Feary Tales miniseries.

Simone got her start in comics writing for Bongo Comics, home of The Simpsons. Soon after, she entered the traditional superhero comics genre with a run on Marvel Comics’ Deadpool (later called Agent X). In recent years, Simone is best known for known for fan-favorite story arcs on DC Comics’ Birds of Prey, Secret Six, Wonder Woman, and Batgirl.