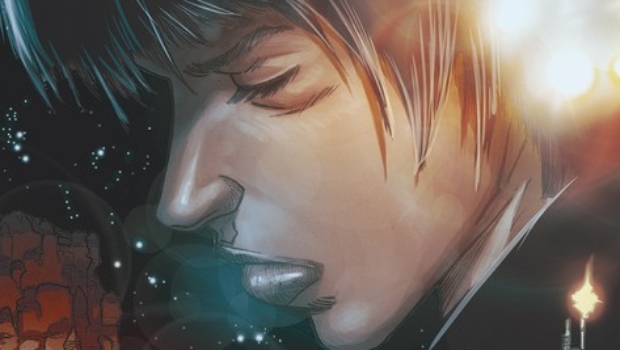 Titan Comics has sent C4S the December 2019 (start pre-ordering!! go to your local comic book store!) info on their titles.

The Doctor and her companions save Christmas from a contemptible coup by the cantankerous Krampus! But is everyone’s favorite Time Lord listed under ‘Naughty’… or ‘Nice’? The second half of a fun, festive sci-fi story from Jody Houser (Stranger Things, Spider-Man: Renew Your Vows).

The breakout mascots of Despicable Me (and their own movie, Minions) are back in a new set of hilarious comic gags! Travel the world with the Minions, as they sample the world’s cuisine – spiced with their own brand of silliness! The Minions are beloved the world over, with 34m Facebook followers, 1.3m Instagram followers, 300k Twitter followers, and over 60,000 comic book sales in the US alone!

A strange new mech and its mysterious pilot have left their mark on Dana Sterling – faced with ghosts of a future yet to come, can a girl out of time save the SDF-1? Brenden Fletcher (Motorcrush, Isola) and artist Elmer Damaso (Robotech/Voltron, Speed Racer) continue the first story of Robotech Remix!

Sherlock: A Scandal In Belgravia #1

The critically acclaimed manga adaptation of Sherlock hits Season Two, introducing the iconic Irene Adler! Fresh from facing down Moriarty, Sherlock Holmes (Benedict Cumberbatch) and John Watson (Martin Freeman) are called in to assist the royal family in a very delicate matter… only to find that the Great Detective may have met his match!

Cover Artists: When the cat’s away, the mice can play… and when their owner’s away, these bored pets get up to all kinds of mischief! A new collection of hilarious animal antics starring the furry friends of The Secret Life Of Pets! Side-splitting one-page comic strips from Stephane Lapuss’, writer of the official Minions comics!

The secret struggle between Assassins and Templars hits the Vietnam War! Part one of a new thriller set in the world of Assassin’s Creed, from Guillaume Dorison (Assassin’s Creed: Conspiracies, Devil May Cry) and artist Ennio Bufi (They Made History). When a Japanese hacker discovers a massive Templar data leak, his investigation leads him to relive the memories of a Assassin cell operating in the depths of ‘Nam…!

The time-twisting road trip hits a speed-bump, as Max realizes she may not know her friends as well as thinks… Acclaimed writers Emma Vieceli and artists Claudia Leonardi and Andrea Izzo continue the highly anticipated third arc of the official comic. Set in the world of the award-winning game from Square Enix and DONTNOD! Life is Strange 2: Episode 5 will be released December 3nd on PC, PS4, and Xbox One.

Rivers Of London: Fey & The Furious #2

The award-winning urban fantasy series Rivers of London continues a tale of fast cars and fairy queens, from series creator Ben Aaronovitch! Deep undercover in the street racing big leagues, can wizarding cop Peter Grant keep up with the competition in his clapped-out car – or does he need an upgrade? A canonical story, set after bestselling novel Lies Sleeping!

Shades Of Magic: The Rebel Army #4

The Rebel Army (4 of 4). New York Times bestseller V. E. Schwab brings The Steel Prince trilogy to a dramatic conclusion! Prince Maxim finally earns his title and vanquishes his enemies – but at what cost? A canonical prequel to the award-winning fantasy novel series, Shades Of Magic, illustrated by hit art team Andrea Olimpieri (Dishonored) and Enrica Eren Angiolini (Doctor Who: The Thirteenth Doctor)!

Marvel Studios’ Avengers The Complete Guide To The Movies

The ultimate guide to the four epic Avengers movies: The Avengers (2012), Avengers: Age of Ultron (2014), Avengers: Infinity War (2018) and Avengers: Endgame! This collector’s magazine includes interviews with President of Marvel Studios Kevin Feige, actor Robert Downey Jr., and the cast and crew of the blockbuster movie series along with essential trivia about all four films!

Must-read interviews, news, articles and reviews from a galaxy far, far away! This issue is the Episode IX movie special – join us as we dig in to The Rise of Skywalker, the grand climax of the Star Wars saga! Plus, we reveal the results of Insider’s Skywalker Saga Survey, take a look at the Meaning of Masks from Vader to Kylo Ren, and discover Life After Skywalker – how to cope with the end of a saga!

Star Wars: The Rise Of Skywalker The Official Movie Special

The ultimate in-depth hardcover companion to the grand climax of the Skywalker saga! Go behind the scenes on Star Wars Episode IX: The Rise of Skywalker, with concept art, set photography, and exclusive interviews with cast and crew!