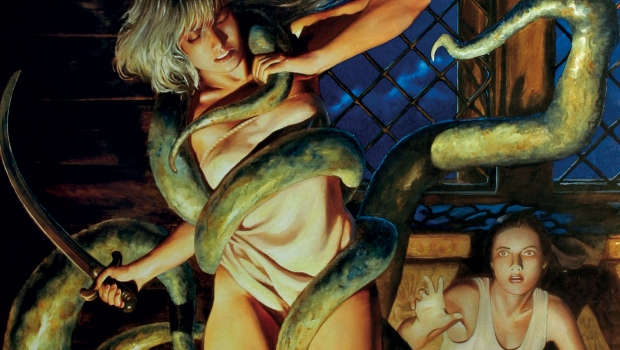 Titan Comics provided C4S with information on their September 2013 titles.

THE FANTASY CLASSIC COLLECTED TOGETHER FOR THE FIRST TIME EVER! FULLY REMASTERED, AND FULLY RESTORED!

Featuring beautiful fully restored artwork by John Bolton, interviews with and commentaries from the creators, and never-before-seen sketches and artwork, this is the ultimate vision of the ultimate fighting fantasy female!

Spawned from the three-time, Oscar-winning animation shorts, Grand Day Out, Close Shave and the feature-length, Curse of the Were-rabbit, the Wallace & Gromit Omnibus chronicles the adventures of that quintessentially British inventor, Wallace and his ever-helpful canine companion, Gromit.

The strip, which appears daily in The Sun, the UK’s most popular daily newspaper, is read by an audience of 2.3 million readers. The full-colour strip features a self-contained, weekly-continuity that sees our plucky, bald inventor race from one hair-brained invention to the next with gusto, extreme silliness and more puns than you can shake a stick at!

The clock is ticking – and three powerful lives are running out!

Given incredible superpowers – and six months to live – by the sexually-transmitted G+ Virus, three Londoners kick back against the spectre of death with everything they’ve got.

Washed-up indie guitarist Weasel tries to make amends for a life that’s totally f*****d – but changing the direction of a lifetime can be murder! Comedian and media personality Monty tests the limits of his new powers of persuasion, with horrifying results… and, after her explosive activation, Verity is on the run from the government – but can her nascent abilities keep her one step ahead of a crack team of GCHQ operatives?

Don’t miss the chance to get on board this critical smash-hit right now – it’s the future of superpowered storytelling!

Check out the trailer here

It’s the slam-bang conclusion of the first Chronos Commandos miniseries, as the Sarge and his Nazi nemesis, Richter, beat the crap outta each other for the stolen Chronosphere core – and only one of them is making it home!

Plus, there’s still the safety of Time, Space and the Universe to worry about, as two Einsteins grapple to fix an overheating time reactor – and the laws of Causality – before reality itself collapses! Will the Sarge make it back alive? When the dust clears, will any Commandos remain? And which last-minute twists will rock your world forever?!

Don’t miss the stunning conclusion, as the first season of Chronos Commandos goes out with an epic bang!

The end of the first mini-series end with 32 pages of story!

The award winning brothers, Dimitri Vegas and Like Mike, are back together again, but this time they are facing each other head-to-head on the main stage of the Tomorrowland festival itself. The Nameless One has turned Mike to the dark side and only his brother can stop him with help from friends like Nervo, Steve Aoki, Thomas Gold, Zatox, Sander Van Doom and many more.

Dan Boultwood’s thrilling tale of SF B-movie derring-do brews to a fiery finale, as the first full movie from Pinetree Studios is rescued from the archives!

Dr. Boy Brett and his lady assistant Doris Night hurry to London in pursuit of the monstrous robot GRURK, now smashing a wave of destruction through the capital, in the face of the beleaguered and ineffectual military might of the British Empire. All seems lost… but does DORIS hold the key to the undoing of this otherworldly invasion?

A must-read for fans of Mystery Science Theater 3000, this is a gorgeously-illustrated, deeply-funny adventure!

Number of Issues/Volumes in Series: On-going

CARPE DIEM: When an endless horde of volcanic monsters march to destroy everything humanity holds dear, not even the CARPEDIEM agents can stop it. It’s the end of the world as they know it and the only one who can stop it is… SIR MONDAY??!

ODYSSEY: Blazing Glory’s show-down with SHARKY in Zuccotti Park raises questions in the White House and President Obama is forced to make a decision that will come back to haunt him

WEIRDING WILLOWS: There is a WEREWOLF loose in the house of Dr Moreau and she may be too much for even Frankenstein’s Monster to handle. Maybe Mowgli might have better luck.

Connect with Titan Comics at: