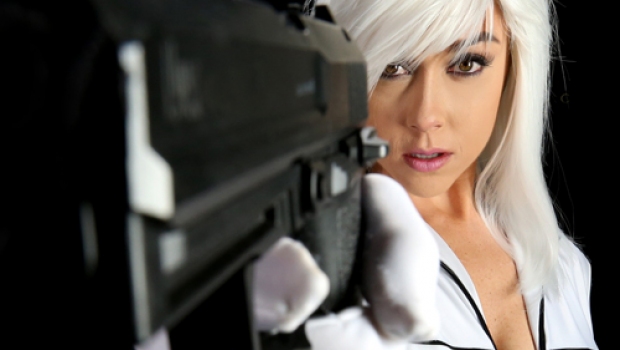 Marshal Pictures and Maw Productions announced a joint effort to bring indy comic book heroine Turra to life. The character originated within
the pages of Maw Productions Jetta Tales of the Toshigawa graphic novel series and carried her own in her book Turra: Bombs and Betrayal. With an established cult following and a film company who excels in genre movies as an art form, the obvious next step was to bring Turra to the big screen. Budding ingénue, Rachel Alig has been cast in the lead role and a plethora of rewards make this a crowdsourcing drive to watch. Getting in at the ground level of a kick ass action movie has never been easier! Donate to the campaign at http://www.indiegogo.com/projects/turra-gun-angel-feature-opening-scene

Turra has been raised as a ninja assassin and is burnt out on the endless training and constant killing. She leaves Japan to become a bounty hunter in America. After the particularly brazen extraction of a target from a night club, Turra is visited by an elder member of the Japanese Mafia who offers her a job she can’t refuse. Being Turra, however, she does refuse and she soon lands in the middle of Yakuza Civil War!

Renowned artist, Jamal Y Igle (Supergirl, Nightwing) also gave his support, “Martheus [Turra’s Creator] is a fantastic talent and taking such a huge leap like this, bringing Turra to life is a bold, worthy endeavor. We have to do what we can to help this project get the funding it needs, and add to the diversity of voices in the film industry.”