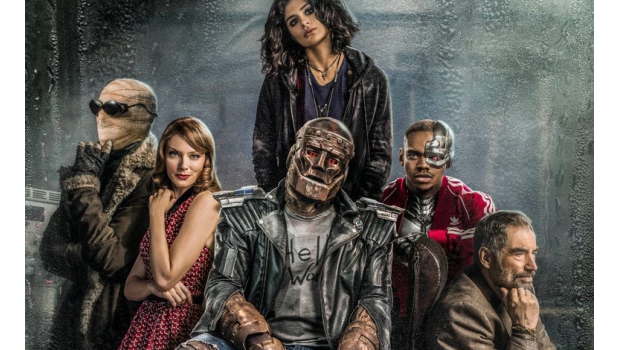 This bunch of superzeros just might be the best thing that’s ever happened to superheroes on TV.

So, another superhero TV show… Has superhero fatigue set in yet? Certainly not with Avengers: Endgame opening with the biggest box-office take in movie history! But then, that’s the MCU, and while the televised version of the DCU has marginally been more successful than Marvel’s TV counterpart, the Arrowverse is starting to show signs of wear: Arrow only has a season left in it (possibly one ̶ or even two ̶ too many)! Supergirl is heading faster than a speeding bullet into superheroes soap opera territory, and Legends of Tomorrow is not living up to its name much at all anymore. Add to that the divided response to Titans, the nascent DCU streaming service’s spearhead show, and you start to see why so many things were stacked up against Doom Patrol making a good first impression.

I watched Doom Patrol because I have been a fan of that superhero group ever since the Invasion crossover event back in 1989. Their numerous comic book incarnations all had merit, even though the Grant Morrison run is arguably the most well-known. I was on board with Doom Patrol getting a show of their own from the get-go. And I can’t say I am disappointed with the result so far.

One of the great things about the superhero genre at the movies (and on TV) is its ability to constantly reinvent itself. Most of the time, the genre relies heavily on a proven formula and you can’t blame producers for using it time and time again ̶ case in point: Captain Marvel, which took in over one billion, despite bringing nothing new to the genre (regardless of what Brie Larson says).

However, every once in a while, a new superhero movie comes along that redefines the genre, or at the very least that brings something new to it. Logan’s overt noir tones, Deadpool’s R-rated antics, and Guardians of the Galaxy’s humor are the strongest examples of the genre’s ability to reinvent itself. And while they did not break new grounds, the first Ant-Man movie and Thor Ragnarok definitely brought something new to the genre.

I went into Doom Patrol hoping it would not be a low-budget, TV version of Suicide Squad. (Not that I didn’t like Suicide Squad.) Doom Patrol turned out to be as weird as it can get. Alan Tudyk’s narration hooked me from the very first line. While I would have thought no one could top Deadpool’s fourth-wall breaking humor, Tudyk manages to elevate it to new heights in the first few minutes of the pilot. That’s no easy feat, and I saw immediately why Tudyk was the best choice not only as the first season’s Big Bad, but also as the series’ narrator. His cracks about film critics, Morrison fans and DC Universe subscribers just slew me. Move over Deadpoool, there’s a new fourth-wall breaking sheriff in town.

Normally, I’m not too keen on origin stories. I think superhero movies have gotten to the point where they can do away with origin stories altogether. But decades into the phenomenon, producers still feel they need to subject viewers to origin stories. It may have been needed for Doom Patrol, understandably, since the group seems to come out of total DC obscurity unless you’re a Morrison fan. However, I had a real hard time with the extensive exposé on Cliff Steele’s transformation into Robotman. (And that’s not even counting the origin stories of the other main characters, which were mercifully shorter.) Those long moments of exposure dominate the first episode, and they keep coming back, five episodes into the season. (If you count flashbacks as origin material.)

Brendan Fraser thankfully provides much needed (comic) relief during those tedious scenes. He’s not very verbose at first, but the moment Robotman finds his mouth, Brendan Fraser seizes the day and saves the first episode from getting overlay dry. It’s good to see Fraser back on the screen, even if it’s only as a voice talent. If you’re old enough, you’ll remember a time when Brendan Fraser was a top brand name in Hollywood. The Mummy is still my all-time favorite remake of a classic horror movie. Fraser never had much range, which explains why his Robotman sounds a lot like his Rick O’Connell from The Mummy. But I don’t mind; Fraser’s Robotman is a scene stealer. He’s the oddest duck in a group of superzeros that are all delightfully weird, and Robotman is their king. Fraser gets the best lines, even if most of them are nearly monosyllabic one-liners centered around the word “fuck.” I just can’t get enough of them. Even Riley Shanahan who only provides motion capture for Robotman acquits himself beautifully, being the perfect physical counterpart to Fraser’s voice talent.

Doom Patrol is not good because it has great effects or original content. The FX are only a few million dollars North of low budget and the plot is right out of a classic 80s comic book. Doom Patrol shines in other areas, many of them. First off, the treatment is worthy of the most twisted X-Files or even Twin Peaks episodes. The donkey alone provides some of the best WTF moments in recent TV history. While some might say that Fraser’s colorful use of language is a Deadpool rip-off, it’s still genuine and fresh. Robotman’s quips provide some of the best moments in the series so far. The bit between Robotman and Crazy Jane about Cyborg’s butt printer was priceless. And the not-so-friendly competition between Cyborg and Robotman delivers some of the most entertaining moments in the series. No need for special effects there; just some great dialogue and situations between two actors generating awesome character-driven moments.

Fraser’s performance eclipses the fine efforts of the other actors who are no less skilled at bringing their own characters to life. I like that the producers are not sexualizing April Bowlby and Diane Guerrero (well, at least not too much). The two actors really stand out in their roles, Bowlby most of all, even though she was not given much to do four episodes into the season. Bowlby starts to shine even brighter by episode 5. Guerrero’s take on Crazy Jane is a nice bit of acting. I can’t wait to see how she tackles Crazy Jane’s other, numerous personalities. She has incredible range, and she shows it in Episode 5 (Paw Patrol) not in broad, over-exaggerated changes between her various personas, but in more subtle ways that prove her talent as an actress. The actors and the original Doom Patrol material are what is making this show so interesting, moving it away from the typical superhero TV fare. And if we had any doubt about that, episode 7 (Therapy Patrol) confirmed that this series was going to stay away from being the usual superhero slap fest in favor of a more character-driven show.

The weak link is Joivan Wade. His cyborg is not very convincing. I don’t envy him his job stepping into this character. This early on the heels of Justice League, it’s the closest thing to a recast of his silver screen counterpart, and Wade works hard to make Cyborg his own character. This TV cyborg just feels weak. His gung-ho attitude and overbearing attempts at leading the team are unconvincing and annoying. By the end of episode three, I still felt the part was miscast, but Wade might still surprise me down the road. By episode five, he starts feeling less stilted and a bit more relatable, which makes me think there is hope beyond the one-note Cyborg we saw in the first few episodes.

The other members of the Doom Patrol are all very engaging. Whatever their origin story, whatever their past, whatever their faults, they are all interesting to watch, not because they kick ass, not because they have awesome superpowers, but simply because they are so appallingly human. These are deeply flawed characters ̶ not in a superficial, hollywoodian fashion, and definitely not as stereotypical superheroes, but in a much more earthly fashion. Robotman, Elasti-Girl, Crazy Jane and Negative Man ̶ they’re all broken, possibly irreversibly. There are very few “feel good” moments at the end of any episode. Any win is often eclipsed by a darker secret or revelation. Getting a knife driven deeper into their own personal wounds is the only reward these people get for helping others. This is what makes them so interesting. It’s not their superpowers. In fact, we haven’t really had a full-blown superhero fight yet. We’ve had some limited, brief skirmishes, but nothing like the now boring aerial martial arts from Arrow or the tired superpowered fights of everything else in the Arrowverse, but that takes nothing away from the experience of watching this show. In fact, it’s part of what makes it refreshing.

The show had its voice from the start, but it feels like it’s still fine-tuning itself. This makes me look forward to the next episode even more. Will the series head anywhere? Will it be given enough time to make a mark? There is an overarching story arc, and a Big Bad; and the characters are all revealing themselves a little at a time. It certainly feels more interesting than its other DCU streaming service compatriot, Titans, and it is breathing life back into the rest of the DCU given that many of the Arrowverse shows are now starting to slow down. In the long run though, Doom Patrol might be a little too offbeat to appeal to the main demographics of superhero shows. Sure, children of the ’80s like me will never tire of hearing Brendan Fraser say “fuck” every other sentence, but I wonder if the crowd that made the Arrowverse popular will find this show appealing. People are clamoring for more diverse content. Well, Doom Patrol was oozing diversity long before it became a thing. It’s the perfect show for the times, but it may be too unconventional to win the viewership it needs to keep streaming.

Also, if the latest rumours about DC re-evaluating its streaming service are true, this might put the future of the show in jeopardy. Doom Patrol might end up being another one of these trendsetting shows like Firefly that never got a chance at a second season for all the wrong reasons.