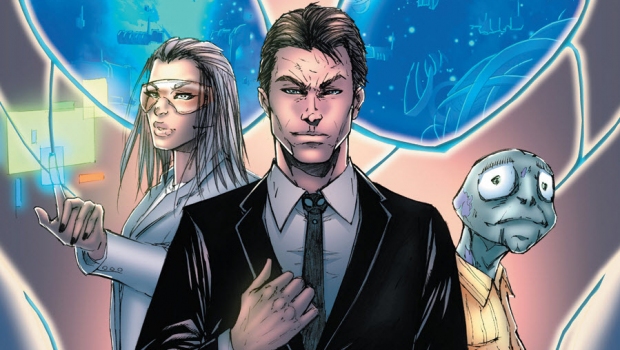 Valentine 2015 Marks The Origin Of Brik Jones: Attorney For Earth

This Valentine’s day a bold new 112 page webcomic storyline launches, promising to bring Justice to our Galaxy. With a little irony, the title is BRIK JONES: ATTORNEY FOR EARTH, Origins, Volume 1.

In October 2012 an ashcan comic titled Brik Jones: Attorney for Earth, The case of case number 69, with line art by Sid Kotian (The Adventures of Apocalypse Al, Dream Police) was released at Stan Lee’s Comikaze. The response was great. The story of a selfish Attorney who through a strange twist of fate has to represent the Earth in interstellar court immediately tickled reader’s funny bones. The original ashcan featured Aliens, ray guns, jet packs (a little alien sex) and more. But what to do next?…

As a former Comics Editor and Designer at Top Cow, Writer Phil Smith (Witchblade: Due Process, Artifacts #29) would often get tagged by artists on social media to various pieces of art (often to his surprise). This technique is often frowned upon in Editorial circles, with one exception; if the art is good. It was through a Magdalena pin up that artist Giuseppe Cafaro (Fathom: Kiani, Trish out of Water) and Smith connected. Shortly, they made a deal. While both writer and artist needed to pursue (ahem) gainful day walking employment, the deal was to produce 4 pages a month till 5 “issues” worth of content had built up (coming from print, grouping in to issues just makes sense). Two and a half years later, they made it (see image of page thumbnails)!

Starting this Valentine’s Day 2015 the first chapter in the origin of Earth’s Attorney begins. The plan is to post a new page every Tuesday for starters. Each subsequent chapter will release more frequently 2, 3 or more updates a week leading up to Stan Lee’s Comikaze 2015 where we will be posting the last page in the first volume of this amazing storyline, that is to say 112 pages of story, starting now and posting the 112th page Halloween 2015. Pages 1 and 2 post This Valentine’s Day. Page 3 posts this Tuesday Feb. 17th.

The original ashcan is online and free to view at the Fighting Lion Comics website. Join the search for Justice, now*!

*Also. there will be Lizard men, Turtle Folk and (Phil’s favorite) Space Whales!

For more information on Fighting Lion Comics and to start reading go to: www.FightingLionComics.com