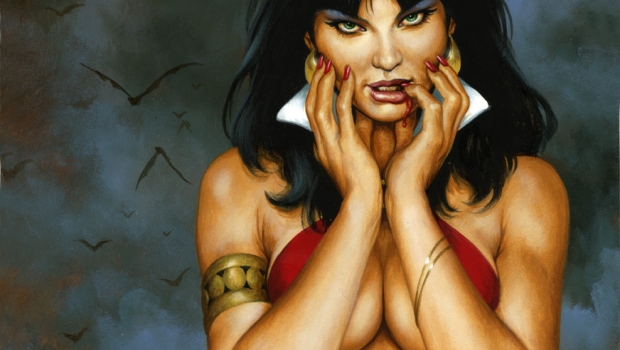 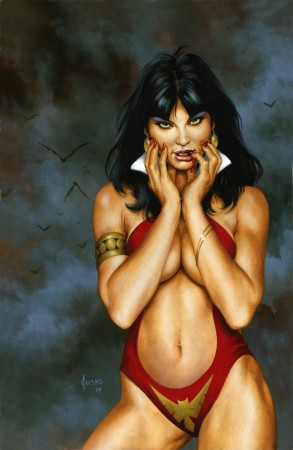 Dynamite Entertainment is proud to announce the January 2015 release of Vampirella #100, a giant-sized spectacular that celebrates the first hundred issues of Dynamite’s Vampirella series since the series launched in 2010. To commemorate the occasion, Dynamite is welcoming Eric Trautmann, Brandon Jerwa, and Mark Rahner – three writers who have steered Vampirella in recent years – to contribute short stories, alongside current ongoing series writer (and central storyteller of the current Vampirella: Feary Tales miniseries) Nancy A. Collins. The publisher is also inviting horror scribe Tim Seeley to cut his teeth for the first time with the comic industry’s most enduring horror icon.

Eric Trautmann, who launched Dynamite’s first foray into Vampirella comics with a twenty-issue run, says, “It’s been a genuine pleasure to return to Vampirella, but, of course, it’s also a little daunting. To me, Vampirella endures because she combines so many elements of horror, humor, pathos, tragedy, and obvious sex appeal, and that’s always quite a lot to live up to (not to mention contributing a story alongside the work of some seriously stellar talent). That sense of history became the starting point for my contribution to Vampirella #100 – trying to capture a timeless quality to the character, and wrapping it in a warm blanket of folklore.”

Brandon Jerwa, who authored eighteen issues of Vampirella’s first volume (plus several well-received spin-off projects), says, “I wouldn’t have guessed that I’d ever write Vampirella; I always liked the character, but it just didn’t seem like the kind of gig that would come my way. Now, I wish I could keep writing her for at least another ten years. It genuinely thrills me to know that I, and two of my best friends and fellow writers (Eric Trautmann and Mark Rahner), have made a substantial contribution to Vampirella’s universe over the last few years. Eric brought her back as a confident, Armani-wearing, Vatican-employed monster hunter – and let’s not forget his amazing Li’l Vampi interpretation – while Mark favors the horrific nod-and-wink pop culture crossovers that he has delivered on multiple occasions. For my part, I tried to shine some light on the sci-fi superheroine aspects of the character, as well as her weird supporting cast. I hope Vampirella #100 isn’t my last dance with the dark lady that I love so much, because I feel like we have so many more adventures ahead of us.” 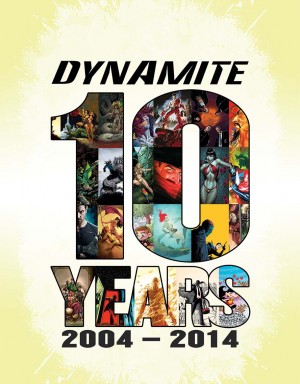 Reflecting on his unique slant on the series, Mark Rahner says, “I like that there can be as many different interpretations of Vampi as there are writers. Mine has been to make her a no-nonsense, cranky, deadly vampire in satires of other pop-culture vampires and killers – Twilight, Buffy, True Blood, Dexter – a selection of stories collected in Vampirella Bites. She notes what’s inherently silly about each and tears ‘em apart… like a Mad spoof that turns extremely violent and unsettling. Without spoiling too much of what I’ve got in store for Vampirella #100, I’ll drop a hint: bloodsucker meets seersucker.”

Currently the architect of the reimagined Chaos! Comics universe (also published by Dynamite), Tim Seeley joins the roster of Vampirella creators with the #100 spectacular. “I couldn’t turn down doing a Vampirella story,” he says. “She’s horror comics royalty! My story focuses on and homages Vampirella’s earliest origins with lots of love!”

“I am pleased and honored to be able to participate in this landmark event,” says Nancy A. Collins, whose ongoing Vampirella series has been well received by critics. Described by Geeked Out Nation as “a perfect fit” for the title, Collins brings “the right amount of spunk while still (making Vampirella) vulnerable.” Dynamite so enjoyed her take on the character that they asked her to spearhead the Vampirella: Feary Tales miniseries. Her rounding out the Vampirella #100 celebration is a no-brainer.

In addition to the five writers on the series, Dynamite welcomes artists Francesco Mann, Dave Acosta, Eman Casallos, Jim Terry, and Javier Miranda-Garcia to provide the spooky atmosphere and frenetic energy the series is known for. Dynamite will also celebrate Vampirella #100 with a variety of cover options, including a Main cover by Joe Jusko, a Variant cover by Joyce Chin, a “Bombshell” Variant cover by Cedric Poulat, and a “Cute” Subscription cover by Tony Fleecs reserved for those hardcore fans who place preorders with their local comic retailers.

Vampirella #100 will be solicited in Diamond Comic Distributors’ November Previews catalog, the premiere source of merchandise for the comic book specialty market, and slated for release in January. Comic book fans are encouraged to reserve copies with their local comic book retailers. Vampirella #100 will also be available for individual customer purchase through digital platforms courtesy of Comixology, iVerse, and Dark Horse Digital.