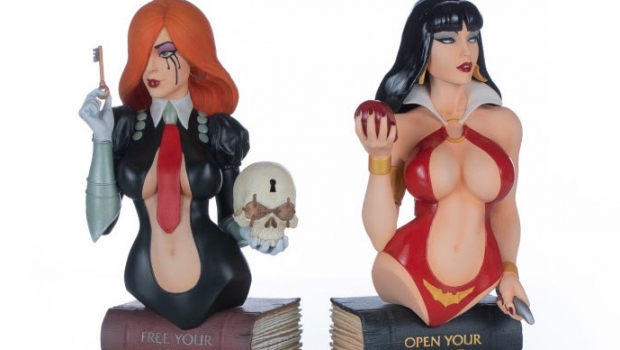 Dynamite and artist Joseph Michael Linsner are proud to debut a set of intricately designed, sculpted and painted mini-bust statues featuring Vampirella and Dawn. Fans can help make this project happen by supporting it on Indiegogo and reserving their copies today!

“I’m in love with these mini-busts. I think Dawn and Vampirella make a fine pair,” said Joseph Michael Linsner. “The sooner we get this whole project funded, the sooner I can put it on my shelf. I don’t love everything that gets manufactured based on my characters, but I really love these! They’re top notch and fantastic!”

Joseph Michael Linsner is one of the greatest modern artists of the female form. His creation of Dawn, a seductive goddess of death and rebirth, exploded on the independent comics scene 30 years ago and has been a fan-favorite since. Since then he’s continued to build on the character’s tapestry across several series, and worked with every major publisher and character.

Linsner first painted Vampirella professionally in 1998 in the midst of one of the character’s peaks under creators like Grant Morrison, Mark Millar, Amanda Conner, Jimmy Palmiotti, and Jae Lee. Since then, Linsner has become one of the definitive cover artists for the character. Flashing forward to 2014, Linsner and Dynamite created the ultimate team-up series of Dawn/Vampirella, with him writing and drawing the interior art. A Vampirella series, Roses for the Dead, followed.

Now these two iconic characters have been portrayed by Linsner in an all-new way for these matching 7.5 inch tall hand-painted resin busts. Based on carefully considered designs and paint mapping from Linsner, acclaimed sculptor Sam Greenwell has brought these beauties into the third dimension.

Each bust is meant to illustrate a different idea as well as the personalities of the characters. Vampi’s visceral vampiric side is represented with the heart she holds and the book base reading “Open Your Heart.” While Dawn’s deathly cool nature is shown with a key, skull and “Free Your Mind.”

The busts will be produced in strictly limited quantities based on support. In addition to the standard versions, each bust comes in a color variation and black and white edition. These will be hand-numbered and capped at 299 units. On top of the statues, supporters can get Linsner’s latest sketchbook, Dawn trading cards, and signed copies of his latest virgin variants for Dynamite.