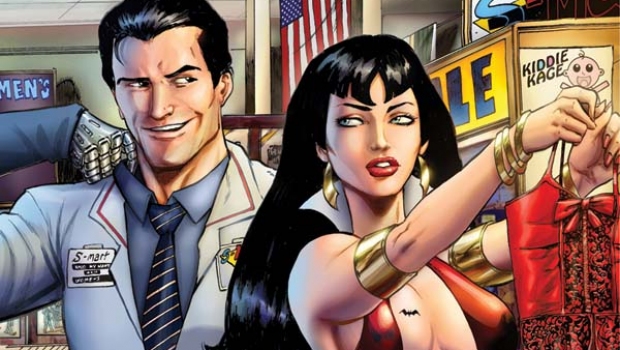 Dynamite Entertainment is proud to announce the July release of Vampirella / Army of Darkness #1, the first issue in a four-issue miniseries that sets Ash Williams, the hard-luck hero of the Army of Darkness franchise, against the classic horror hostess-turned-heroine Vampirella, for the first time in comic history. Written by Mark Rahner and featuring artwork by Jethro Morales, the first issue will be offered with multiple collectible covers by industry heavyweights Tim Seeley and Jae Lee, plus a “Cute” variant by Tony Fleecs exclusively available to subscription customers.

The events of Vampirella / Army of Darkness take place during Ash Williams’ time trapped in the England of 1300 A.D. When the terrified, primitive screwheads approach the Chosen One with tales of a horrific flying Deadite — one similar to the one he blasted out of the air when first arrived, but much deadlier — Ash sets out with his boomstick and chainsaw to protect his adopted people. At the same time, a raven-haired temptress wants to give him some sugar… as his last meal!

Writer Mark Rahner says, “I loved writing Ash in Vampirella / Army of Darkness. He’s the rare combination of completely oblivious buffoon who’s also somehow incredibly cool when he has to be. The Vampi stories I’ve done have been sick satires of other pop culture horror – Buffy, True Blood, and Kolchak in the 100th issue special. I’m excited to write her in more of a straight-ahead (well, mostly) horror-adventure. This Vampirella is less superhero and more occult temptress and monster… and she definitely doesn’t belong in 1300 A.D.”

“Mark’s writing gets better with each series, and we can’t wait for fans to see this tale. Two icons meeting, and the mayhem that will ensue. This series is full of bloody chainsaws, fanged vixens, demon possessions, and boomsticks aplenty!” States Dynamite CEO/Publisher Nick Barrucci.

Army of Darkness is a 1992 fantasy/comedy film with strong horror elements starring Bruce Campbell (Burn Notice), the third installment in a trilogy featuring reluctant hero Ash Williams. Directed by Sam Raimi (Spider-Man), the film saw its tough-as-nails, wise-cracking protagonist transported from the modern era to the Dark Ages in his continuing war against demonic evil. Army of Darkness generated a dedicated fan following for its premise and lead actor. Dynamite Entertainment has been the proud home to Army of Darkness comic books for over ten years.

Vampirella is a beautiful heroine who remains, even after 45 years of publication, one of the comic industry’s leading ladies, due in no small part to Dynamite Entertainment’s stewardship of the character. Since Vampirella’s very healthy resurgence in 2010, Dynamite has published two volumes of a monthly series, several miniseries and one-shot specials, and crossovers with multimedia brands and comic book peers. The Vampirella franchise is a haven for writers and artists with a penchant for the macabre.